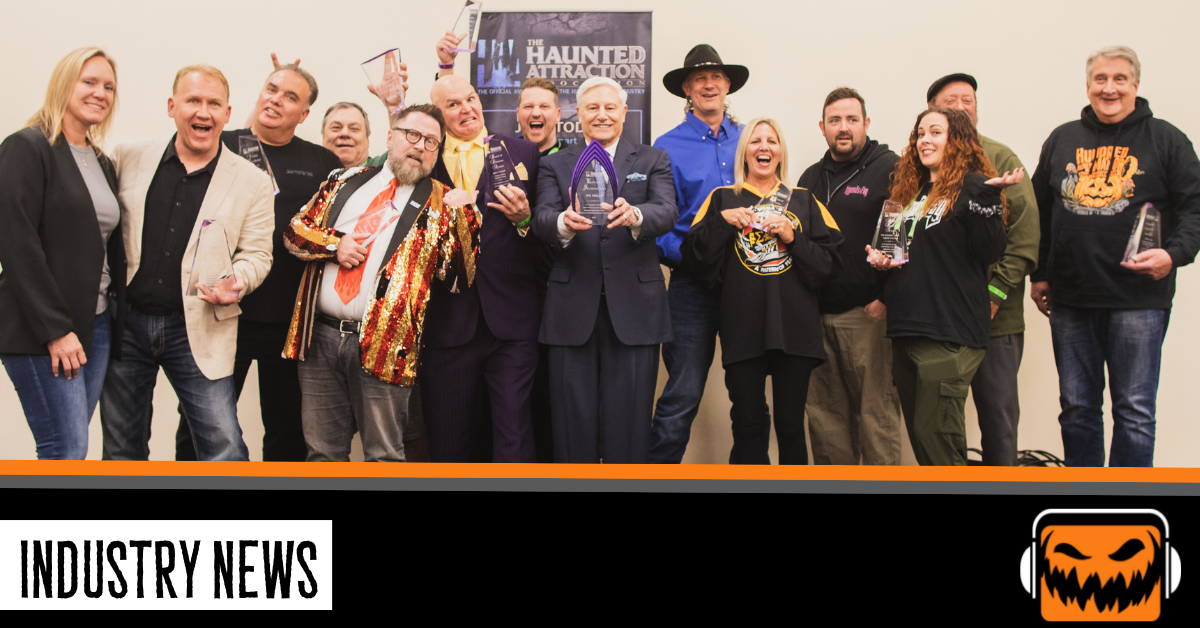 Our roundup of news from around the Haunted Attraction Industry for the week of March 22nd, 2022.

Stay tuned for more than 30+ vendor interviews from this year's TransWorld's Halloween & Attractions Show; they will be posted in the coming weeks. We would like to thank all the haunters & industry members that visited us at our booth throughout the weekend. We appreciate your continued support and look forward to sharing even more news and interviews with you throughout this coming haunt season.

Want to receive the FULL news? Subscribe to our newsletter here.

During the HAA's Annual State of the Industry seminar, the board focused on the progress made this year toward the three-year strategic plan. Specifically, president Spencer Terry called out the virtual mixers and Facebook group as successful networking initiatives. Spencer also mentioned the formation of advisory committees to revamp home haunt membership and the Top Haunts Program. Looking ahead, the association is in a good financial position, having saved money by changing PR firms. C.H.O.A.S. will expand to being offered at MHC this year. The annual auction raised $29,000. The Q&A session focused on: whether demand will stay strong in 2022; whether the war will impact haunted houses; and staffing challenges. Philip and Scott discuss the presentation in more detail on this week's Green Tagged.

Tickets are now on sale for Creep It Real OC (Santa Ana, California). Get ready for spooky fun under the sun September 10th - 11th, 2022. The event features over 100 Halloween & horror-themed vendors, spooky treats, music, photo ops, and more on the historic grounds of the Heritage Museum of Orange County. New for 2022 are V.I.C. - Very Important Creep - tickets starting at $45. These include single-day admission, an exclusive Creep It Real OC 2022 t-shirt, and the "Ghostly Glimpse Tour" inside the haunted Kellogg House hosted by the team at Haunted Orange County. A portion of all V.I.C. tickets will be donated to the Heritage Museum of Orange County to help maintain, renovate, and preserve the historic site.

HAuNTcon is partnering with Fear Expo for their 2023 live event. The expo will take place March 24th - 26th, 2023 at the Owensboro Convention Center in Owensboro, Kentucky. In a March 18th, newsletter, the HAuNTcon Team announced the partnership saying, "It’s an exciting time to bring the community back together, and the partnership between Fear Expo and HAuNTcon will elevate the experience for the industry."

U.S. Haunts & Events
With his pink, button nose he smells your fears and with his big, floppy ears he hears your screams! The Beaster Bunny is coming to town for you! Get your pictures with NecroManor Haunted House's very own "Beaster Bunny" at their Louisiana Boardwalk location Friday, April 8th and Saturday, April 9th from 6:00 p.m. - 10:00 p.m. Pictures are free and will be posted on the NecroManor Haunted House Facebook page after the event.

Pirates of Emerson (Pleasanton, California) has announced their 2022 haunt season schedule. The walkthrough haunt will operate 21 nights between September 30th - October 31st. Timed tickets will be available in the coming months.

A new haunted attraction may be coming to Franklin Township in Pennsylvania this Halloween season. Haunt actor and Halloween enthusiast Kory Rabenold approached supervisors in the Township last week to pitch his idea to build a small barn on his property for a haunted house and haunted woods. Rabenold said he would like to host haunt events from the last weekend in September through the first weekend in October. Supervisor Jason Frey and Board Chairman Fred Kemmerer both reacted favorably, suggesting that Rabenold pitch his plan to the township's zoning officer for approval.

After having only a display for 2020, in 2021 Rotten Apple 907 (Burbank, CA) celebrated its 30th anniversary by returning to a walkthrough attraction with the theme "Evil in the London Fog". The home haunt welcomed over 4,000 guests over a 6-night run and raised over $6,000 for Volunteers of the Burbank Animal Shelter.
Competitions
The Opening Ceremony for the 3rd annual Haunt Comp will take place Saturday, March 26th at 2:00 p.m. PDT via Zoom (Meeting ID 945 2857 0064). The presentation will include a history of haunts, information on Haunt Comp partners (Midsummer Scream, Knott's Scary Farm, and The Essential Art Department), and a reveal of this year's theme. In light of the rescheduled opening ceremonies, sign-ups have been extended to 11:59 p.m. PST on March 26th. A full list of eligibility requirements, rules, and judging criteria can be found on the competition's website.
Trends
With all the available options for people's entertainment dollars, how do haunts continue to grow? In a recent HAN interview, Mark McDonough, President of Creative Visions shared his perspective on the future of the haunt entertainment industry. He advised smaller haunts to look to expand their offerings with activities such as ax throwing, escape rooms, concessions, and merchandise, which can become a bigger part of a haunt's revenue stream. These additional activities can allow for a greater focus on the quality of the individual guest experience over throughput quantity - something McDonough sees as increasingly important with today's consumers.

With over 17 years of experience, the team at CFX has noticed an interesting trend: due to social media and the expansion in eCommerce, regular consumers now have access to the same materials and supplies as haunts. Overall this has lowered the barriers for people to create characters and raised awareness for silicon masks among general consumers, all leading to benefits for haunts. "You can go out and you can buy an off-the-shelf mask, match it up with some good wardrobe, and all the sudden you have an icon character that everyone will remember," said CFX team member Josh, "People being exposed to silicon masks has really opened up the industry and set an expectation for any live events that are happening now".
Haunt Vendors
Granite Insurance is working with an advisory board of haunters to offer insurance solutions for the haunt industry. They hope to offer incentives for safety practices and policies tailored to individual haunts’ activities and eventually streamline the process through an online portal.

This past year Midnight Syndicate celebrated 25 years of producing dark symphonic soundtracks for the haunt industry. In an interview with the Haunted Attraction Network, composer and producer Edward Douglas discussed Midnight Syndicate's evolution through the years - from their beginning providing music to Cleveland haunts, to their live show at Cedar Point, to creating custom music for Halloween Horror Nights 30. A life-long horror fan, Douglas is inspired by haunts and the haunt community, "I always felt that in the haunt industry, it's always been about helping each other. That's been our attitude since day one. So, if we can create something, that's going to inspire a fellow artist with the creation or make it more effective, make it more what they see in their head, that's great. That's what it's always been about for a Midnight Syndicate, working together with the haunt industry hand-in-hand."