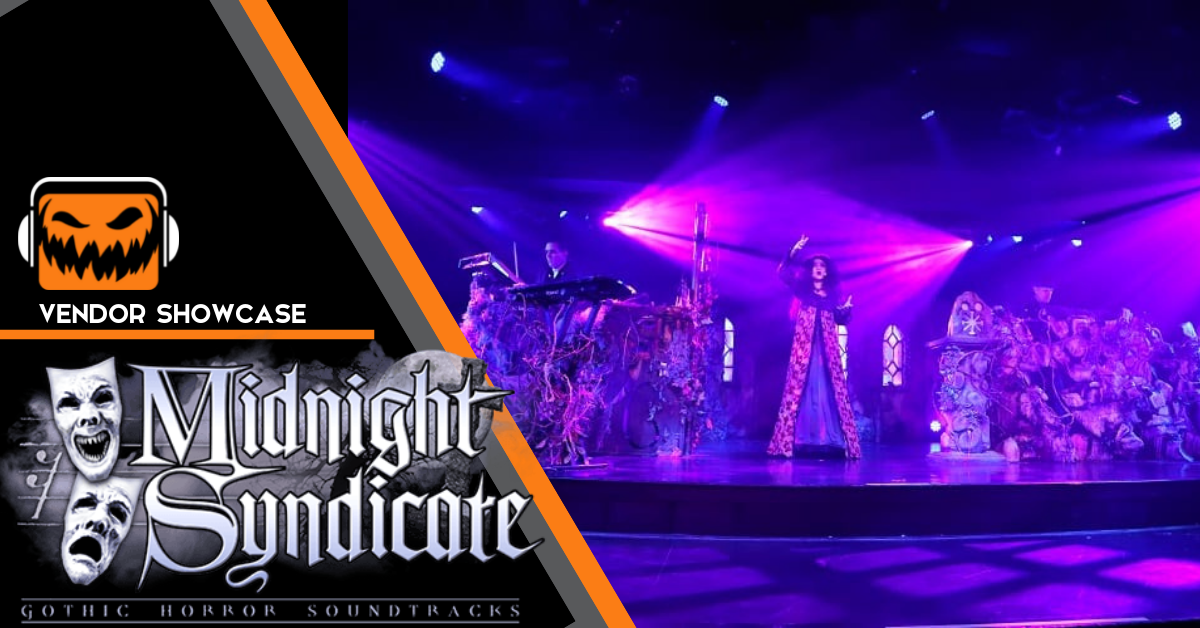 2021 was one of the busiest years ever for Midnight Syndicate, and we'll dive into the details and reflect on the past 25 years.

2021 was one of the busiest years ever for Midnight Syndicate. Beyond releasing their new Bloodlines album, they also branched out by releasing videos and music from their live shows, and let's not forget the custom album they made for Universal Studios Orlando Halloween Horror Nights 30. We'll learn about each of these and the evolution of Midnight Syndicate over the past 25 years from composer and producer Edward Douglas.

When we first started making these albums there just wasn't a lot of music or resources available to haunters, and so you'd hear a lot of the same songs, a lot of the traditional rock tunes. So, we saw a really great opportunity there. So, we took our music to all the haunts in the Cleveland area that we were familiar with. In 1999, we went to Transworld, and that's where we met the rest of the haunted attraction industry, and the rest is history.

We've just been producing albums now for 25 years and trying to focus on what haunts need and can use. I think that's what made us unique. We were a band that was actually recording our albums with the haunt industry in mind. We set up a haunted attraction registry, a real simple way that haunts could register with us, cross promote each other, but also feel that they are covered to use the music in their public performances

2021 Was A Huge Year, Especially For The Evolution Of Midnight Syndicate

Ed: As the music industry has changed, we knew that we were going to need to start developing a live element to the Midnight Syndicate experience, and so we started doing these shows at Cedar point. It's a big multimedia horror themed show that, I'm sure, all of our haunters would very much appreciate it. We've been doing that for a long time and enough that we were able to put together our favorite tracks from those shows that we've done over the years and put together a live album. So, we released that at the beginning of last year.

Midnight Syndicate is orchestral music and it is extraordinarily hard to reproduce that live. So, we knew that if Midnight Syndicate was ever to do a live show, it would have to involve a lot more than just the music; just make it a complete multimedia immersive experience. So, Cedar Point, when we first did that, they had a huge theater that we were really able to build this wonderful set and really give people some visual eye candy.

Since then, that theater got torn down, but they moved into a slightly smaller theater which gives people a more intimate experience. Just having a theater that we can work in for seven to eight weekends has been a lot of fun and is creating very unique experiences for people at the park. I don't think they've ever seen an amusement park show like what we do. I don't think there's ever been anything quite like that.

Philip: You spent so long in the haunt industry and going to events, working with haunters, and thinking about what hunters need, and then you get here and you're creating, in a sense, almost like a miniature haunt experience

Ed: It's so funny, that's such an accurate representation of what we do. A lot of our show was absolutely, entirely inspired by the things that we have seen and experienced in haunted houses through our entire life. So it's like a full circle thing. Hopefully some of our music was able to inspire the haunt designers. Just in turn, those haunt designers have inspired us for the live Midnight Syndicate shows. And we are definitely taking from our experience just going through countless haunted houses and trying to pull some of those elements into our show. It just makes it more immersive for the audience. Especially today, people need, they need to really feel a part of it.

Cedar Point put up a poll in 2020, "what show entertained you most", and we actually ranked like second in the list, and it was like the greatest feeling in the world. Growing up and loving that park so much, and being able to do that, it was like, so fricking cool.

Philip: Custom shows like this are not only great for the time of the year, but they also allow Midnights Syndicate to write in special throwbacks to the park that locals will understand.

Ed: Each show has a story, and the stories can sometimes loosely connect year after year. There are a couple of shows we did that were very specific to Cedar point. They involve the park, and I think that's really what's resonated with fans. We're not even just putting together a Halloween show, or theatrical show, we're doing show that acknowledges where it's being held.

Philip: Aside from the live album, Midnight Syndicate also released a custom album for Halloween Horror Nights 30 last year. After a year on hiatus, Halloween Horror Nights 30 ended up being a record-breaking year for Universal Studios Orlando, and they leaned into Year 30 by bringing back a lot of the previous characters. Midnight Syndicate had a long history with Universal Studios Orlando having worked with them in the past, and it was a perfect opportunity to bring back the artist.

Ed: When they're bringing back all the iconic characters for a haunt that just featured all the characters that people remember, like timing was perfect. So, took a lot of research as we went back and tried to find out which of our songs resonated most with people that he went to the events, so they hear that, brought back memories. It was a lot of fun also finding those songs, and then also finding some of these audio files that the Halloween Horror Nights had used either in the haunt or on the website and integrating those into things.

We've only created original music for a haunt once before, and that was in 2007 when we did it for the Carnival of Carnage year at Halloween Horror Nights. That music had never been released before, so it was kind of cool, perfect opportunity to release that for the first time; it had never been out there.

So, you know, you're pulling all this together and just, yeah and it all just came together really nice. The idea of bringing back all the iconic characters, looking back, just made the artwork all flowed perfectly. It was a lot of fun, and we love working with with the team there. Hopefully, we can do more in the future, I would expect that we will be.

Ed: We followed up with our first album in a long time called Bloodlines, which is a prequel to one of our most popular albums, which is the 13th Hour Haunted Mansion theme disk. The music is now available everywhere, like on our website you can buy the CD, and then, of course, nowadays YouTube and Spotify, and then of course, on Amazon and iTunes as well.

Midnight Syndicate Will Be At Transworld

Ed: Yeah, Transworld has been a constant for us over the years, and it's so much fun and a great opportunity for us to connect with all of friends in the haunt industry. Always a really highlight of the year. The live album, we'll have that there, we'll have the new bloodlines album, on CD and vinyl, and merch and everything like that. We will have a ton of stuff at the booth.

Why Care About What A Haunt Needs?

Ed: My first introduction to horror was definitely ghost stories and albums of Vincent Price reciting ghost stories and watching those old horror films. That's what got me hooked. But then the next level came when I experienced my first haunted house. All the things I had read or had my imagination, some of that was coming to life right in front of me as I went to these haunts. That was the next progression in my development as a horror artist, as an artist in general. The haunts started inspiring me, and that became absolutely what I pulled from when I was writing the first music for Midnight Syndicate, until this day.

You want to give back too, right? Isn't it all about helping each other? I always felt that in the haunt industry, it's always been about helping each other. That's been our attitude since day one. So, if we can create something, that's going to inspire a fellow artist with the creation, or make it more effective, make it more what they see in their head, that's great. So, that's what it's always been about for a Midnight Syndicate, working together with a haunt industry hand-in-hand, and just that's why it's important,