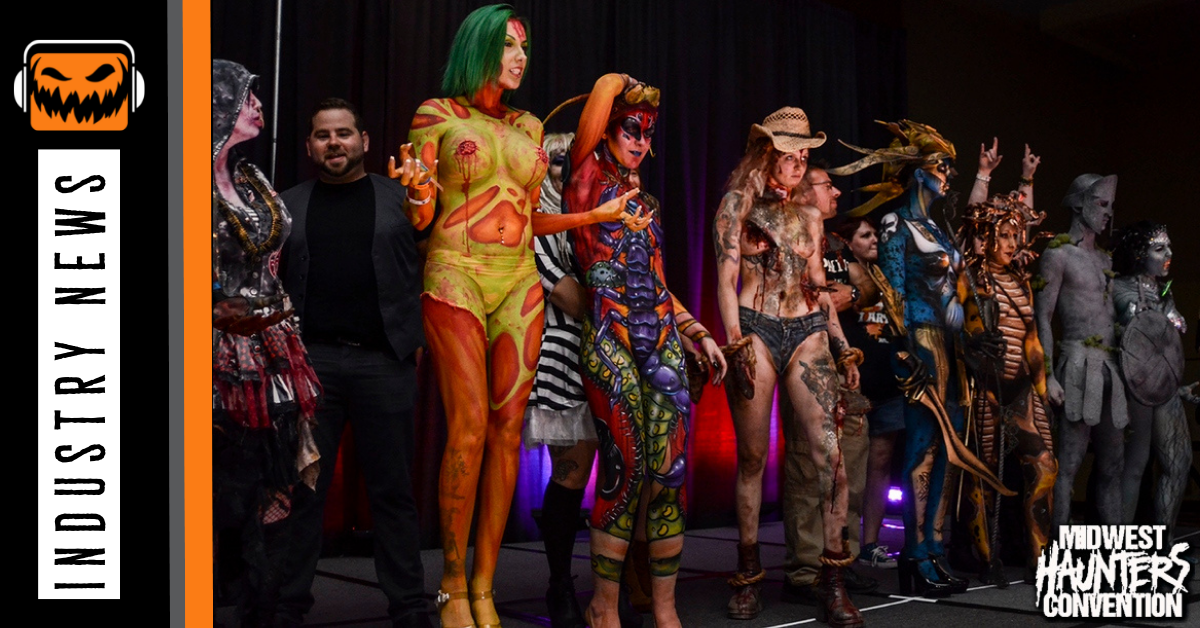 Read all the stories here. Subscribe  Subscribe to the Haunted Attraction Network newsletter to receive the latest haunt & Halloween industry news in your inbox each week.

Registration has opened for this year's Midwest Haunters Convention, taking place at the Donald E. Stephens Convention Center in Rosemont, Illinois on June 11th - 12th with the pre-con Haunt Tour on June 10th. Early bird rates are available through Monday, April 4th at 11:59 p.m. CDT. Basic Registration is $50 ($55 after April 4th) and includes weekend trade show floor access, 2 Early Bird Seminars, new entertainment, competitions, and demonstrations throughout the weekend, and access to the Kid Zone. The Weekend Package is $385 ($405 after April 4th) and includes all the Basic Registration inclusions along with access to the Saturday party, and all 50-minute seminars on Saturday and Sunday. Children under 12 years old are admitted for free on the trade show floor. Attendees must register to attend the Midwest Haunters Convention before they can purchase tickets to individual tours, events, or seminars.

Tradeshows can be a wonderful way to network with peers, view the industry's latest products and services, and learn new techniques. In a recent episode of A Scott in the Dark, Scott Swenson shared insights and audio from his experience at TransWorld's Halloween & Attraction Show 2022.

Five new members are joining the HAA Board of Directors in 2022. In the coming days, the Haunted Attraction Network is releasing a series of podcasts to introduce each new member.

First in the series is Brent Wilson, General Manager of Planet Doom in Idaho Falls, Idaho. Brent's areas of expertise include fire and building codes and lease negotiations. Brent shared four important tips regarding leasing a space for your haunt:
Next is Benjamin Gagne, owner of The Thirteenth Hour Haunted Attraction in Indianapolis, Indiana. Starting out as a home haunter, Benjamin has recently navigated the process of transitioning from a home haunt to a pro haunter. He also brings expertise in logistics from his full-time career at Amazon. In his interview, Benjamin shares some strategies he has used for throughput, including implementing an "A" and "B" mode - allowing for longer spiels and performances when attendance is lower and faster delivery for the busiest nights close to Halloween.

Immediately following the 2022 State of the Industry Presentation at TransWorld's Halloween & Attractions show, members of the HAA Board of Directors hosted a Q&A to address attendee questions. The Haunted Attractions Network has the full Q&A available here.
Haunters Against Hate

Submissions are now open for The Book of Haunters Volume 8. Volume 8 will feature haunters, behind-the-scenes crew, and haunt owners. Interested parties should e-mail high-resolution pictures to paul@hauntersagainsthate.com for consideration. If accepted, participants will receive a photo release form and questionnaire. Pre-orders for The Book of Haunters Volume 8 will begin on the Haunters Against Hate website once the book is 70% full.

The American Horrorplex (Louisville, Kentucky) is currently hiring scareactors for their 2022 season. Actors/Actresses (18+ years old) will be trained by award-winning staff members to scare and entertain thousands of fans each weekend this fall. Benefits include employee discounts, meals, and on-the-job training.
Haunt Vendors
Recently Home Depot has become a hot-spot for Halloween yard decorations with hits like their 12ft skeletons. While their collections do not typically go on sale until July, there has been a leaked preview of the Home Depot 2022 lineup. Those 12ft skeletons will be receiving new friends this year - a 12ft Werewolf with sounds and light-up eyes and 12ft animated Witch. Other Halloween highlights include a "life-sized" Oogie Boogie and 15ft glowing Graveyard Phantom. It is important to note that these leaked items are not part of an official press release, and therefore subject to changes in design and price until official announcements are made. They do, however, give insight into the company's plans and provide a little inspiration to home haunters and Halloween enthusiasts as they start to think about their upcoming displays.

Stiltbeast Studios debuted their new Stiltbeast Boo-tanicals line at this year's TransWorld's Halloween & Attractions Show. The line features costumes, props, puppets, and more featuring a nature-oriented theme. From a Pan costume, fungus zombies, a nature witch, and the "Vineling", all the offerings have a plant and botanical theme. Unfortunately, orders for the 2022 haunt season closed with a very successful TransWorld show, however, keep a lookout as if they run ahead of their delivery schedule, they may open orders back up for a small window later in the Spring/Summer.

For over 20 years, Ghost Ride Productions has created hyper-realistic props for the haunted attraction industry. In a recent Haunted Attraction Network interview, Michael Chaille of Ghost Ride Productions discussed the company's history, featured products for 2022, and supply chain difficulties of the past year. Orders for the 2022 Halloween season have been filling up fast - as of March 18th, first-come, first-serve ship dates had already reached early August. Be sure to place your order soon if you would like products to arrive in time for your haunt season.