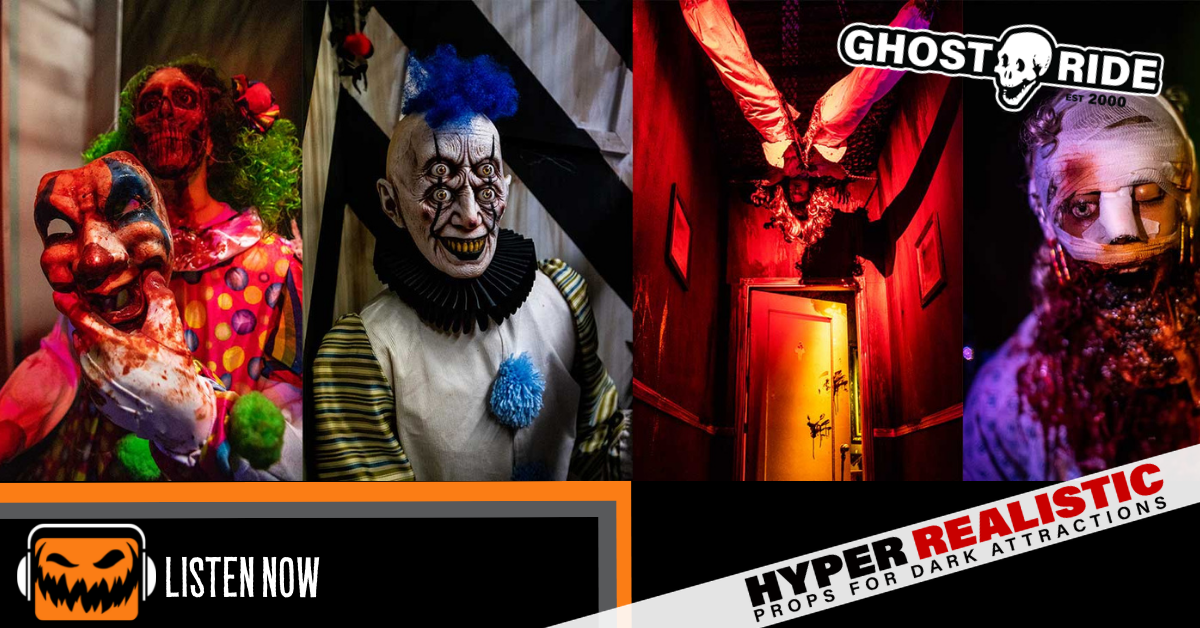 Coming up, for over 20 years Ghost Ride Productions has been providing hyper-realistic props to attractions – and their orders for this season are filling up fast.

Coming up, for over 20 years Ghost Ride Productions has been providing hyper-realistic props to attractions – and their orders for this season are filling up fast.

This is part of our vendor showcase series, in partnership with the Haunted Attraction Association. Tyler from The Scare Factor conducted this interview.

Ghost Ride Productions INC. was born in the year 2000, in a North Hollywood CA garage. From the beginning, our vision has been to create unique products to satisfy gaps and delight customers in the dark attractions market. With time, we have refined techniques, experimented a ton, and developed talented artists to continue bringing hyper realistic props and new ideas to the haunted attraction industry.

We are a small group of passionate artists and craftspeople who love making things that will delight and terrify audiences across boundaries. We keep our eyes open and our finger on the pulse of the market, to provide customers with “the thing that’s been missing” in their event. Each and every product in our catalog is conceptualized and handmade by us, in our Boise Idaho studio. Our products are not sold in stores.

Philip: Coming up, for over 20 years, Ghostride has been providing hyper realistic props to attractions, and their orders for this season are already going fast.

Tyler from the Scare Factor conducted this interview, and he caught Michael at Ghostride on Friday. The booth was slammed and, as you'll hear, order timelines are already filling up. Here's Michael to give us a brief history on Ghostride.

Ghostride: We use the moniker hyper-realistic, but this year we've gone over the top with some of the gore, but the paint detail. We've really upped the paint detail, because you just have to do that.

As a vendor that's not only worked for theme parks, but also had our own haunt, and that decided to stick with just making our own product, I think we're pretty in tune to what would work in a haunt. You want people to have immersiveness, some people do that with using icon characters, that are from movies. But we want to stick to the realism. I like the spooky, the kooky, I love that too, the Funhouse stuff. But what I think works the best for me, what my wheelhouse is, is realism, and it's like, is that person really alive? And I think that's what makes us separate from the other people.

Tyler: Absolutely. would you say your most popular product is?

Ghostride: Well, by far our most popular product would probably be the Mindy product. This was a game-changer because she was in a specific pose, and there was no seam line whatsoever. The only seam line was on her head. So, we did the head separately, so we can interchange those heads to make it a different character. But the Mindy character, which was 2017, was a big change for us because we went away from doing big theme to basically this technique of making a realistic body. And then from that point from '17 till now we've just been improving on the paint job ever since. Because all of our props come out, stark white, we don't tint the foam or anything, it's just stark white, so we have to start from a white canvas.

Tyler: Totally pale, that's incredible. What's some of the new stuff you're offering here for 2022?

Ghostride: Well, we always do a live cast. So, we did Holly, who Came into our shop during February, and we did a completely different pose where her arm is like hanging off the table. So, we're breaking that 2d plane, like everything that's flat on the table, "oh, it's a flat. back." Well, this now has a hand that actually comes separate so when you ship it, it won't break, it doesn't have wire. So, you just use a zip tie and it just attaches. I would love to have one of those for my haunted house, because it's now breaking that edge, and it does move a little bit as well. So, if there's a little movement on it, and it makes them think, "well, is that real?" That's kinda what we want to do is, "is that a real person, or not?"

Tyler: I've seen people walking and just of twitching the arm and it starts swinging back and forth.

Tyler: What would one of your most underrated products are?

Ghostride: There's a two-year cycle on most of our product. So, every year we try to figure out like what's going to be the biggest seller? And we never get it right, because some things are like last second. But it was one of the things that we did in the shop last. So, all of our experience for getting stuff ready for the show gets poured into this one piece. And then this year for the Haunted Attraction Association, we did a custom piece that we did. We're not having it in our booth at all, it's just there for the auction, and I just thought, "well, you know, we'll just do this, there's no real big motivation other than it fits some of the things that we're doing." I mistakenly had it out yesterday and several people wanted to buy it right off the bat, and I'm like, I mean, I didn't even think about using that one. But it was just one of the last things we did, and so it had all of this technology that we had put into the other props. Sometimes it takes about a year or two for things to come around. If you want scary, we got it. you want a big, huge dude that's 650 pounds with no blood or anything, we got it. So, it's like the whole spectrum of things.

Tyler: So, speaking of the HAA show, or the auction, that sort of thing, what do you feel like you get out of being a HAA vendor?

Ghostride: This is a fun business, but it's still a business. But the business itself isn't like any other thing, you know? You have swings of supplies that you're trying to find. You have to deal with this timeline. Most people are open for, you know, 20 days. How do you get the product there? I mean, new people coming in, there's licensing issues, I mean, training, all of that stuff, there's a lot of mistakes that have been made, but HAA will help you, limit that.

Tyler: What do you feel makes it so worth coming back here to Transworld every year? I see you guys every year, what makes Transworld the place to be?

Tyler: Absolutely. So, you running any specials here for the show?

Ghostride: We're not doing any specials this year for the show. We're limiting our sales this year so that we can make sure that we get it to everybody. Our supply chain, we've secured as much as we can, but world events, it's so tenuous right now that we just have to basically protect ourselves so that we don't over-commit and then our costs go way up. We did not raise our prices over the last year. We did some incremental, but you know, our poly foam prices raised 5 times last year, and I can see it raising probably another two or three times. So, I have to anticipate that. So, no discounts this year, but our booth has all brand-new product, everything is brand new, and it's all online, because we switch over on our website. So right now, our trade show website is the show site. So if you go to booth 18, that's everything that's in our booth, and you can place an order just like you were here,

Tyler: If somebody does want to buy something and get it before, say September, October, is there like a deadline that you would recommend get your order in by this day?

Ghostride: We have been doing a system for the last couple of years, we try to do a ship date, and not when you're going to get it, but when we could ship it out of our location. So, right now it's a Friday, we're at about August, we're just getting into August right now. So, the best thing you do, whether you're online or whether you're here, is to place the order before Sunday. And if you can't place it before Sunday, you should probably email us and let us know that you're wanting to place an order, because we can help you out with that. You can't take an order in September, and we're just not going to do it. We'll have orders that people want to place in August, and we'll say we can't do it, but we can do it for '23. So, we'll try our best to get it out, but you know, we just don't want, to make anybody upset.