My Zombie Valentine at Dark Castle in Elgin South Carolina 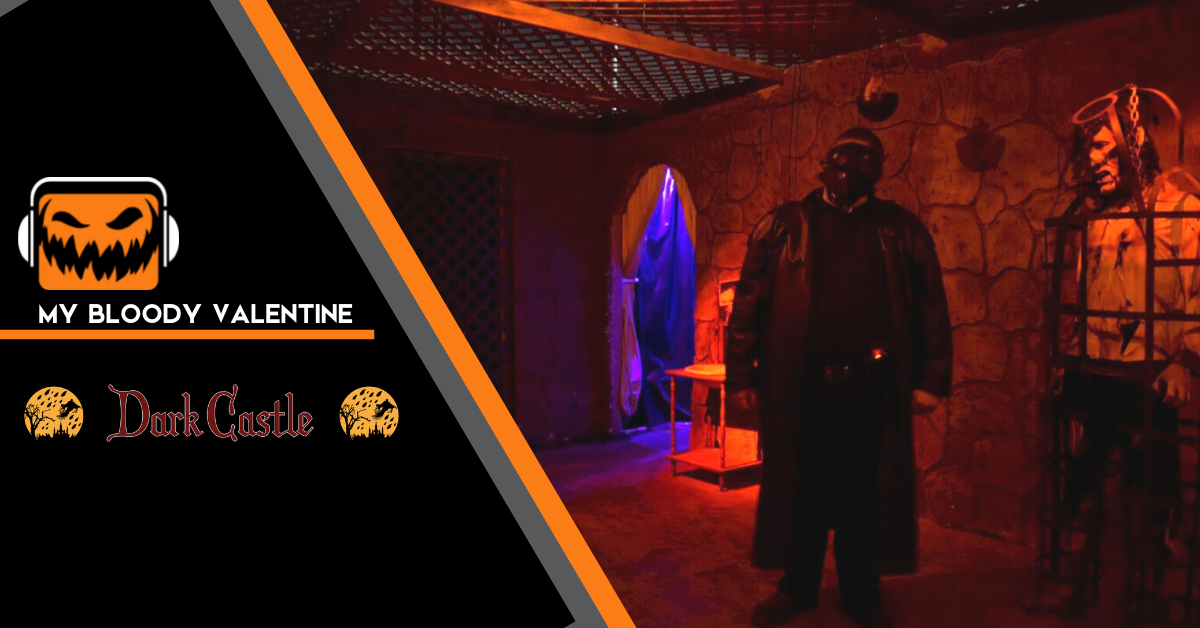 Valentine’s Day is over, but there are still haunts around the country celebrating spooky romance this coming holiday weekend. One of those haunts is Dark Castle in Elgin South Carolina.

Dark Castle in Elgin South Carolina has one of the most unique off-season experiences we’ve seen. Dark Castle’s My Bloody Valentine puts couples through a 2-hour zombie survival scenario.

Elizabeth: My name is Elizabeth Oliveira, and I help run Dark Castle Haunted Attraction. Dark Castle is a facility that offers not only an indoor haunt and outdoor guided haunt through the woods but also a zombie survival scenario during Halloween. We also offer multiple different events throughout the year.

Philip: Speaking of multiple events throughout the year, this is February, and we were talking to you because you have quite an exciting, interesting, and unique event happening for February.

Elizabeth: We call it My Zombie Valentine, it's an interactive zombie survival scenario. So, when you get there and are told all the rules, you come into the gate, usually, there's a hoard of zombies running after you as you get into the gate, and then you get to the safe zone and start the game. Couples are working together to get all of their scavenger items. They each have different items at different locations, both inside and outside the haunt. You have a map stating where your next items are, and there are also mini-games and side quests you can complete.

Philip: You're combining live actors with puzzles from escape rooms, and with the scavenger hunt concept, and still utilizing your haunt and letting them explore the haunt to do these things together.

Elizabeth: We wanted to make it like a video game. You know, you've got your main quest, and then you've got your side quests, and there are ways you can win the game by just doing the side quests, but you still must finish the main quest if you want to win. The true winners are usually the people that do everything and get everything correct. We have a 10-minute escape room as one of our side games. You might be able to escape from that escape room, but the team that gets out the quickest gets the most extra points from that escape room.

There are informational people, and there are also people who are not zombies, who might've been a part of the scene at the opening, that are running around in the woods and, maybe, if they see people stash a bunch of items somewhere, they might move them so they can't find them later. Or they might help you if you look like you're not having a good time. The whole point is for everyone to have a good time.

Philip: Essentially, you sprinkled NPCs around.

Elizabeth: Yes, we do. That's literally what we call ourselves sometimes, are NPCs.

Elizabeth: We have people that have been here from the very first year and do it every single year because every year we change the theme. We change every mini-game. This year, it was an earthquake party, because locally we've been having earthquakes which are weird for Columbia, South Carolina. We've been having a lot of earthquakes where our haunted house is, so we made it like we were from California and we moved to Elgin, and now that they are having earthquakes, so we're doing our yearly earthquake party.

For example, this year, my father and I were playing the people hosting the party, and we also had a few people playing seismologists and studying the area. Well, the seismologist explained, "Oh, there's a pocket of gas under Elgin, and these earthquakes might be really bad. We don't know what that gas is." And we're drunkenly like, "ah, nobody cares!" But then a hoard of zombies comes out, so we all run inside the gate together and we tell everyone, “Look, we need you guys to gather supplies if we're going to survive this."

So, everyone has their main quest to gather their supplies. But, while they're out there, for example, we have giant Jenga on a moving bridge that they must find a certain Jenga piece while this bridge is moving. Or we had zombie laser tag spiders that were crawling around and attacking people, and making their guns not work, so they would have to kill those spiders. One year, we even did this thing where couples each got one hand to use to change the diaper on a zombie baby. That was a lot of fun. We try to do things where they can work together.

What Is the Creation Process for the Event?

Elizabeth: We have a little bit of experience. My brother was a writer in LA for about a decade. I've been doing professional theater since I was 16. I've been in off-Broadway shows. My father was on the board and my mother was the costumier for the longest-running theater in the nation. My husband, who I was lucky enough to meet in New York, is a special effects artist who learned under the great Dick Smith himself. So, we have the tools and the people necessary to get something like this done relatively quickly. My brother writes it up, my father and I rehearse it, my mom makes sure the costumes are fine, my husband does the special effects, and all our volunteers are well-versed in how to be zombies at this point.

Elizabeth: We see 12 couples per night, and it is a two-hour-long experience. It is an hour and a half of solid gameplay, about 15 minutes before, and then about 15 minutes to count all their items and score. In the end, we do give prizes. We give pretty good prizes. Our top winners receive two VIP tickets to our haunted house.

Philip: I love that.

Elizabeth: The winners under that receive two regular tickets, and the third prize is one regular ticket to our haunted house. If you win first place, you're winning something worth more than the $60 you spent to come.

Philip: Not only are you marketing your haunt, but also, as you mentioned previously, you're engaging your volunteers throughout the year, which is key to keeping volunteers engaged.

Elizabeth: Oh, definitely. We have a party every single month to celebrate the birthdays that happened, or whatever holiday it is. In April, we're doing something that we call the Castle Kraken Cup, and that is going to be our version of the Squid Game.

What Is the History of the Event?

Elizabeth: Well, when we first opened our haunt in 2013, my uncle, Mitch Oates, came up with the idea of an interactive zombie fighting scenario. So, during Halloween that year, we got some Nerf axes, we got some zombies together, and we did about a 10-minute run as part of our haunt. We liked it so much that, once we bought our property in 2014, we decided to make an event centered around that. Because everyone that came through wanted more, they wanted a longer version of it. So, we said, "why not?"

Philip: And what I like about it too is that it is horror-based and not Halloween-dependent.

Elizabeth: Yes, yes. We love Halloween and all, but you're right, horror is year-round, and that's nice because you can do a horror theme for anything.

How Did the First Weekend of 2022 Zombie Valentine Go?

Elizabeth: The first event went swimmingly, and there were absolutely no teams that were having trouble working together, or we're not in the mood for it. Everyone who had signed up for it seemed to understand that they were signing up for very physical activity. A lot of people said it was way better than they even expected, but every year we're improving vastly. For example, the very first year, it was a scavenger hunt with zombies. And now we've advanced to escape rooms and extra mini-games, which does add a whole other level to the experience.

What Is in the Future for Off-Season Events?

Elizabeth: We add an extra off-season event almost every year. My Zombie Valentine was the very first off-season event that we added. We then slowly added a Christmas event and an event in May. We also do an extreme haunt. It's 13 hours long of simulated torture. It's very safe, not McKamey Manor-type stuff, but maybe what people would hope to go to if they were to go. Still, also very theatrical. It's 13 hours long, you get a meal while you're there, but you only get to sleep for two hours max.

We're currently building a theater on the property, and I would like to do an old-style comedy-horror theater, where you would watch a comedy and then watch a horror show. We, as a haunt, are very comical. We're usually very funny characters because we found it puts your audience at ease so that when the scare comes, they're much more startled by it than they would normally be.

Philip: What do you think someone should avoid if they are looking to create an immersive experience that is off-season?

Elizabeth: I think they should avoid assuming that normal scare actors will be able to do the types of things required for this kind of experience. Our scare actors have been with us, some of them 15 years now, so they understand how we work as a haunt. But, when new people come from other haunts, we've noticed that retraining their mindset is something that we must work on because you can't just say, "Oh, you know how to freak somebody out, so you'll know how to entertain somebody." Entertainment is a completely different ball game.

Originally Elizabeth Stepp, she’s been working in the Haunt since Day 1, starting when she was 9 years old. Elizabeth is currently the Indoor Head Guide and has a vast array of characters: Rigg, Penny Creepy, Areola and Superfluous.