It's Slasher Weekend at Scare USA in Two Rivers Wisconsin 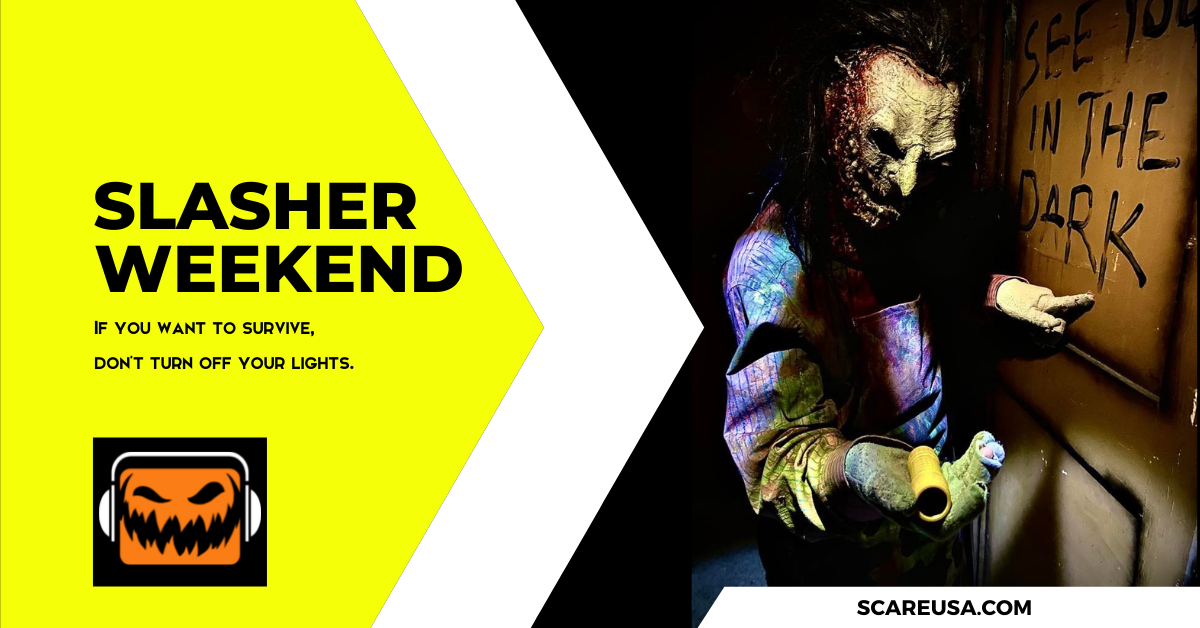 Scare USA in Two Rivers Wisconsin is opening this weekend, May 13th and 14th, for Slasher weekend – an experience where guests use flashlights to follow arrows and find PRIZES!

Scare USA in Two Rivers Wisconsin is opening this weekend, May 13th and 14th, for Slasher weekend – an experience where guests use flashlights to follow arrows and find PRIZES! We’ll hear all about it.

Philip: Coming up Scare USA in Two Rivers, Wisconsin is opening this weekend for Slasher Weekend, an experience where guests use flashlights to follow arrows and find prizes, all in the dark and while dodging scare actors.

Today, we're talking with John Schwarz, he's the owner of Scare USA in Two Rivers, Wisconsin. Scare USA is in their eighth season, and they're opening this weekend for a new event. Here's John.

John: Once you pull up, you'll be able to see two warehouse buildings, and it's not just a general warehouse. Actually, the building that Scare USA is hosted in, is a family-owned business that used to build boats from Wisconsin Dells to tour boats and personal yachts from back in the fifties. So, it has that old patina, and we still incorporate some of the old machinery, and we call them props now, but it's just articles and pieces from within the building to set the stage.

So upcoming Friday, the 13th and the 14th of May, we have Slasher Weekend. Slasher Weekend, it's a lights out experience where your group will get a flashlight per customer, and you'll follow the arrows. Some of these arrows may lead to prizes.

This event is different from our main event. Our main event is more focused on the traditional haunted house and Halloween. This is a lights out experience, but it is nothing like the Blackout, because it's not as intense. This is more fun because you get a chance to find prizes. There will still be monsters, but they're more playful, they're more fun, because we're there to have more fun, not as scary. But there will still be elements of scare. You'll each be given a flashlight, and when you enter the attraction, the layout is similar, but it is not the same, because we've already started to modify for this coming season. So, we've taken out some walls and just re navigated the path a little.

So, you'll, as a customer, want to look at the floor. You'll need to identify arrows, and the arrows will eventually guide you out of the attraction. However, we have arrows that sometimes may lead down different pathways to, let's say an example of a fuse box, or a treasure chest, we're still playing around with these ideas. But there'll be an actor placed in those areas, right? And there will be a prize at some of these random arrow locations, and that's the fun. Because your group could walk out of there with the prize, and we don't know what the prizes are going to be. Maybe two people in your group walk out with a gift, maybe none. But that's the fun of this.

This weekend, we're putting together these gift packages, and they'll include something like merchandise or swag of Scare USA, possibly some main event tickets for our upcoming season, and just other fun things that you'll be able to earn with this experience.

Philip: Tell me why this focus on customer interactions, why do you think customer actions is going to be important?

John: I feel that customer interaction is going, and is important, because people want to build memories. And, in order to build memories, you have to have an experience that is different and that does stand out. People could just go through a regular haunted house, but that's not what the Slasher Weekend is about. Our characters, while yes, during the main event, they are really scary, this event they're more playful and fun. They want to give you prizes, but you have to figure out where those prizes are by following arrows. So, you'll be able to interact with the actors more, and like I say, you have a chance to win a prize.

Philip: One of the prizes that somebody could win in the experience is tickets your upcoming season, and let's talk about that. Your upcoming season, you have your dates set up for that. Tell me when you're opening for the Halloween season this year.

John: We are opening September 30th, and we'll be running every Friday and Saturday in October, followed by the Blackout Experience, November 4th, 5th, 11th, and 12th.

Philip: Of course, when they come in October, it's going to be very different from this event that you're having. It'll be a more traditional style haunted attraction, where it's going to be scary, there'll be actors, obviously a linear path to go through. Tell me a little bit about what you have planned for this coming season, from a thematic standpoint. You know, we don't want any spoilers, but give us the elevator pitch, the story and the thematic elements.

John: Killer's First Trick or Treaters. We have found our calling as far as a theme, and it works so well with the building that we have, and it allows us to not just have a specific storyline, it's not aliens, it's not zombies, but this allows us to bring in any type of a " killer" character, and also bring in that traditional trick or treat style, which is so fun to not just decorate, but the people that tour Scare USA just are attracted to that.

We used to have a pumpkin house in our city, which had thousands of pumpkins. So, we have kind of grown that tradition, brought it over to Scare USA. So, we get the community with that aspect as well. But the general concept for October is, we are there, we are going to scare you, we are one of the scariest, if not the scariest, in Wisconsin. The stories that come out of this place from the local police department, they're always on site, and the paramedics, it is phenomenal. People come out, hyperventilating, sweating, it just amazes me. So, I know our monsters are doing a great job inside.

But the unique thing about what we do is, we interact with the customers. We have fun with them, they have fun, they get to do things at our place that other haunts you don't really get to do, and that's the unique thing that we're bringing back this year, more customer interaction. We're expanding our outdoor sets to allow that. There'll be multiple photo opportunities for you and your friends and your family. So that's unique, and I'm so excited about this coming season.

John: Yeah, you know what, Philip? What I've noticed over my time of haunting is, it is a limited market as far as how many people actually like to be scared. What people really like to do is to have fun, and if you can bring that fun concept into your attraction, the blood and guts, hey, that's cool, I'm all for that, but that only appeals to a certain demographic, right? We have a lot of people in our community and in the state of Wisconsin they know how to have fun. So, we are just providing that hub, that entertainment source for them.

You're right, customer interaction is huge. When I'm out, I want to be with my friends and my family. That's what makes the memories is the interacting. You can tour an attraction or a haunted house, like we used to over the last 25 years. What's different now with Scare USA is it's that interaction, that's what people are craving. They're telling us what they want, and we are giving it to them.

Philip: And, of course, we're going to have you back on when it gets closer to Halloween to find out more about specifically what you have planned. Cause I know it's a little bit too early to release that here publicly, but I want to know, in a broader sense, what do you think one of the biggest challenges this season, for you, is going to be?

John: Well, lumber prices. Gratefully though, we have a partnership with a lumber mill that they've been given us incredible discounts. So, I'd say as far as a challenge, it's making sure that we're giving a great show. Our numbers have been going up every year, and to not veer off of that path, that every single season we are executing the best performance, a quality product, not necessarily quantity.