Latex & Your Monsters: Zombie Skin FX Has You Covered 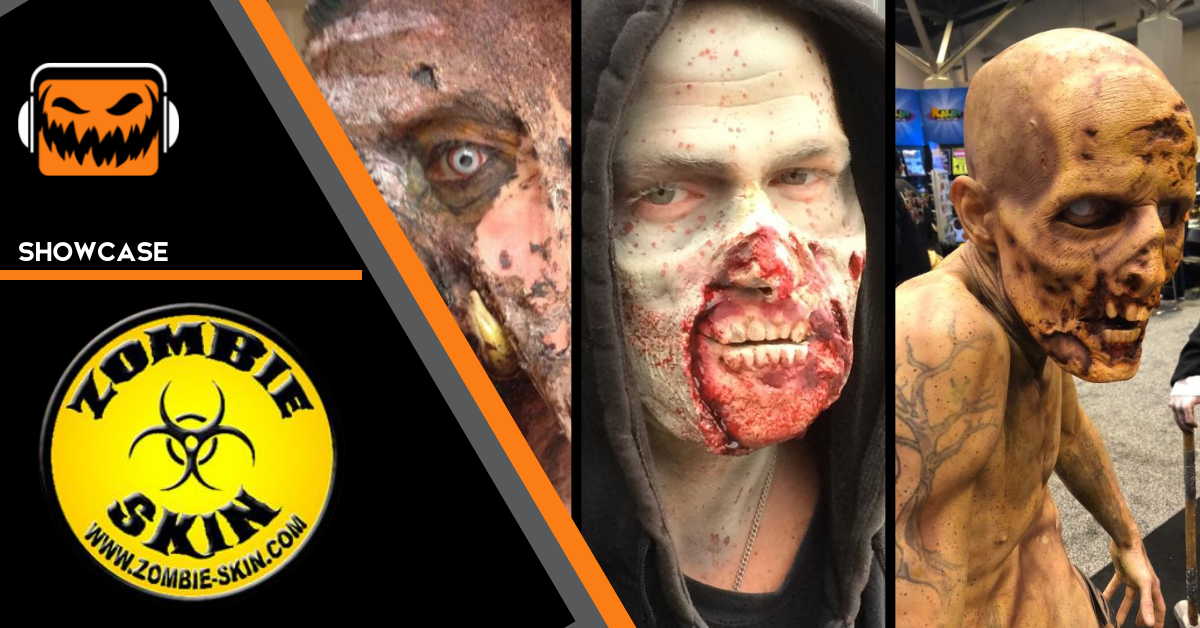 Zombie Skin FX has your latex needs covered, special packages available at Transworld, and Joe Glenn discusses actor trends he is seeing in the market

Will latex cost more this season? Plus, why creating icon characters might be worth the cost for your haunt. Today, Joe Glenn, owner of Zombie Skin FX gives us his take on trends in latex makeup and discusses what he will have at Transworld.

What Is Zombie Skin FX?

Joe: It's the only cosmetic grade, ammonia free latex on the market. So, it's designed to be used on the body. So, not only is it used by itself for burns, cuts, wounds, what have you, it's also being used a lot for filling in edges on prosthetics. Now on the haunt level, we don't have five to six hours, we've got 5 to 10 minutes. On your queue line actors, you know, your major actors, you spend some more time.

Even at Universal, they're not spending four hours on a character, they might spend an hour or two on the Grinch, but a lot of times my product will be used to help them make that time frame. They'll blend the edge away with it, our product dries very fast, it's very easy to work with, especially in our syringes we call hypos, and it just lays an edge down and fills the gap and fills it's nice and smooth.

What Is Planned For This Year?

Joe: This year at Transworld we're bringing back our Pro Haunt Kits and our Medium Pro Haunt Kits. It basically is enough to cover you for the season, depending on your haunt size. As well, we have our single jars, our four-ounce jars, our one-ounce syringes, and we even do have a 12 pack of one-ounce containers.

Our pro haunt kit, you get 24 one-ounce oranges, a mix and match colors—flesh, original, red, black—a hundred foam latex cut and wound appliances, 50 stipple sponges, and four stainless steel spatulas. And if you were to buy that just straight-out retail price, and you'd be like $426. At the show, it's going to be $299, 30% off. We will not have these kits at the show, they will be order only. It would just be impossible to have that much product there and kits ready to go. Our medium haunt kit, it's basically half of that, and the price of that is $179.

So, you're getting a lot. I mean, some places charge $5 and $6 for a foam latex appliance. Some of these are like full throat appliances. All of our jars are going to be a $25 apiece, the four-ounce jars. The syringes will be $10. So, really doing the 25% to 30% off on everything for the show pricing.

Philip: And that show pricing, is it going to be available only at the show or also online for people that can't attend?

Joe: Our pricing has stayed the same from last year's show all the way through now. I wanted to be fair to the haunts that were not able to open, and the ones that were able to be open. Because of that, we've kind of kept our pricing at this right now. Latex is actually going to go way up in price here very soon. So, if you're listening and you're going to be purchasing, purchase at the show or shortly thereafter, because I'm going to say by July 1st the price is probably going to be going up. And it's unfortunate, but the way things are going, everything's getting expensive. the transportation costs that are going to shooting way up. Don't be surprised if you see raw materials, double in price.

Philip: Some vendors are saying that whatever you kind of don't place by Transworld, it can't really be guaranteed because they only have a finite supply, or they're not sure about getting in, you know, new, raw materials, but I think it's different with each person.

Joe: We buy in August for the following year. So, we are set up for this year. If I have a shortage, I'll be the first person to call and say, "Hey, you know, we were low on syringes. We're not getting syringes until next week. That's the best we can do right now. And we'll get them to you." Customer service is one of my biggest things I'm very concerned about because without good customers, I'm nothing, I'm just another company.

Philip: A lot of the discussion right now is, of course, about how to utilize actors more effectively. And one of those more effective methods is to increase how good they look so they can interact with the guests and queue lines more and more. Are you seeing anything that from your direction?

Joe: You're not selling a scare, you're selling an experience. The actors are now ambassadors, basically, for the haunts and attractions. People want to come back and see, "I remember talking to him, I got my picture with him." They get another one. So, it creates that nostalgia. I know at one haunt I worked at a family that came back and they were by one of our main characters for seven, eight years. The kids grew up with this guy every Halloween, and it was one thing they looked forward to is, "let's go see them." They became an iconic character, and that is money in the bank.

Especially like, say you got a kid that's really scared, and you see a character stay in character and then make that kid feel comfortable again. Well, the parents are going to bring them back, and let's face it, that's the market. We want repeat customers.

Again, it's not cheap doing your own characters, but when you have them and you own them, you have them forever. Because no one's going to have the molds, no, one's going to have the capability to say, "okay, well, we designed this prosthetic for this character. We own the molds to it. We're the only ones that can make it." Can someone come close to it or copy it? But that's all it will be, a close or a copy.

What Is The Biggest Misconception About Makeup And Designing Special Effects?

Joe: That it's easy and that you don't have to practice.

Philip: For someone listening that might be newer to this space in haunted attractions, doing these makeup and character design, how would you recommend that they practice?

Joe: Honestly, the best thing they could do is learn from the masters. Don't go to YouTube looking at the guys that they're trying to build followers. Spend the money, go to the library, get some of the books, start reading the books, then get a membership to Stan Winston Studio School of Effect. You've got the best of the best teaching you, and honestly, they're teaching you the right way to do things, they're not mixing Vaseline and flour to make something, they're using stuff that's on the market that you can use. A lot of people are surprised how expensive the products are, but you get what you pay for.