What John Carpenter’s Legacy Can Teach You About Making Monsters 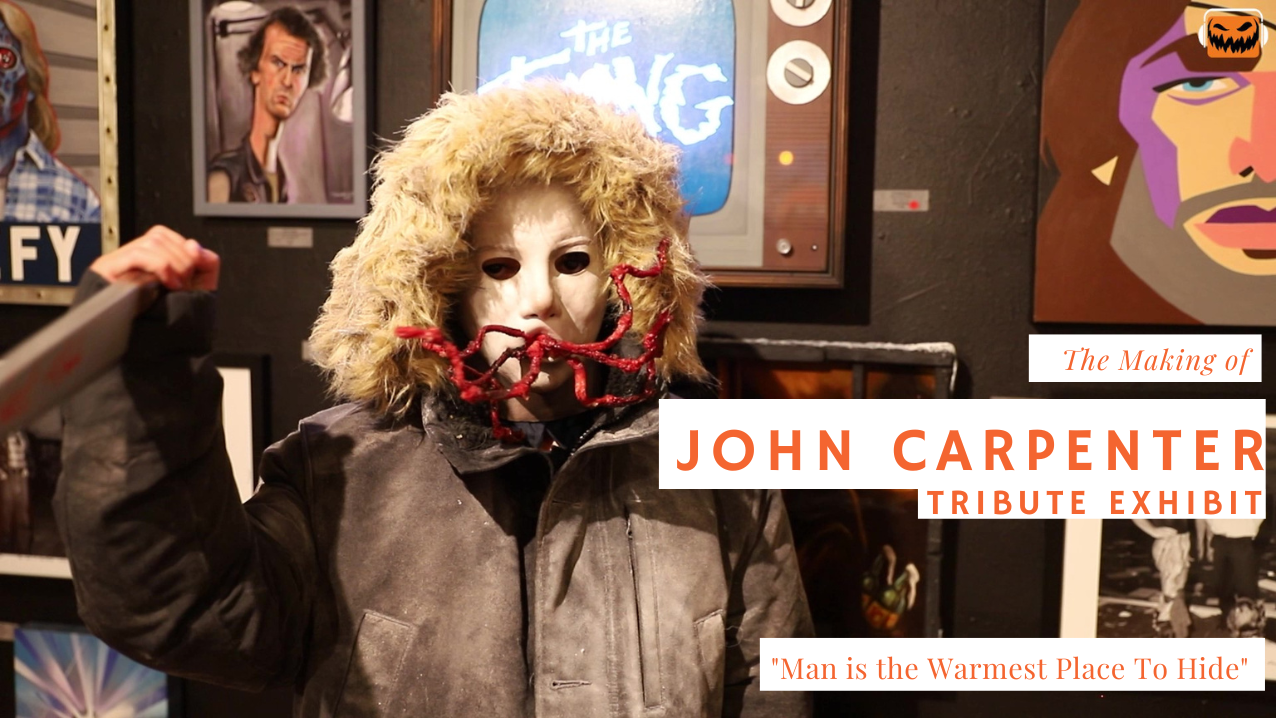 “Man is the Warmest Place to Hide" opened June 25th at Sugarmynt Gallery to celebrate the 40th anniversary of The Thing and pays tribute to the 1980s filmography of director John Carpenter.

“Man is the Warmest Place to Hide" opened June 25th at Sugarmynt Gallery to celebrate the 40th anniversary of The Thing and pays tribute to the 1980s filmography of director John Carpenter. Today we’ll visit the exhibit to learn about John Carpenter’s legacy and what it can teach you about making monsters for your haunt. Featured in this episode are curators Mark Tavares and Erin Haggerty, plus artist Kevin Smith. This exhibit is open through July 17, 2022, at Sugarmynt Gallery in Pasadena (https://www.sugarmynt.com/currentexhibit). Subscribe to all our offerings: https://linktr.ee/hauntedattractionnetwork

Mark: I used to do special makeup effects, and The Thing is an important movie to those of us in that particular career. It was groundbreaking on several levels, you know? It's an incredible story, it's tension building, it deals with a really amazing theme. It was ahead of its time in terms of the themes of disease, invasion, paranoia, distrust. Then again, the special effects which were created by Rob Bottin, who I think was only 23 years old at the time, and a protege of Rick Bakers and whatnot, and they were just some of the most mind-bending transformations that we've ever seen in movies. To this day, I think, it's hard to be taught, you know? It was so inspirational, on that particular end, to people like myself who were in the industry.

Erin: For me, it was just, it opened up in 1982. It went against ET. I personally did not like ET, and I went to theater, and I saw The Thing and I was just overwhelmed with how good it was, how concise and tight it was. Even though the characters aren't built out, they're a 100% built out, you know exactly who's doing what, where, and we still don't know who The Thing is. Like is it Childs, is it MacReady? I mean, and we're still having conversations about it now 40 years later trying to figure it out.

Mark: Movies like this, they've always held up a mirror to society. You can take it decades later and apply those themes and say, "yep, this is what we're going through right now." That's why we also included They Live in this exhibit as well, because as silly as one might think, the concept of aliens who are here in disguise and slowly acclimatizing the planet to their needs and whatnot, and playing on our weaknesses, it's really happening, you know? I mean, they're they elite classes and whatnot.

So, with The Thing, I mean, that was a much more personal, much more intimate story of distrust and things like that, but it just shows how easy we can turn against each other. You could see that throughout the decades, since the movie came out, that's where you can apply that.

Erin: Every artist that we approached was so excited to do their interpretation of it, again, because of everything that was going on in our culture right now. It really, like, I think the artwork is even better than it normally is. I mean, it's normally spectacular, but everyone just brought their A+ game to this.

Mark: Yeah, because there's a lot of love for The Thing, and everyone we talked to is like, "I got to be in the show. I got to be in the show." Because, I mean, the themes, as we've talked about, but also the imagery from the movie is so potent. I mean, it's like people remember the spider head, Norris's chest opening up, all these amazing moments and that are reflected in the artwork.

Erin: Make sure that if you're coming to see the show that you definitely look at the 3D stuff that we have on the table, because it's a little hard to miss, but there's some great stuff. There's a light bulb that's painting amazing, there's a cup, there's a Elvis bust as a They Live. So, make sure that you're actually looking at everything, and there's a lot of great 3D stuff in addition to the 2D stuff. Yeah, I think it's just kind of taking your time and actually absorbing everything, because there's just a lot to see.

Mark: One of the things I like about this show is that the movies are finally getting their due. Well, they've been getting their due for a while, but it's like, now to see this kind of appreciation for the stuff. Because back in 1982, like we were saying, this movie was trounced by ET, so was Blade Runner, so was a number of others, you know? It was just the summer of feel-good aliens.

Erin: I would add on to that, I also think that they don't necessarily get a lot of backing from bigger corporations and stuff. So, I think the grassroots really coming up and supporting the movies, everyone's inspiration, and how they are inspired by the movies is really important.

Erin: I've always been a horror fan, I'm also a massive movie fan, I worked in theaters when I was going through college, in high school. So, movies are just near and dear to my heart. The Thing was one of the ones, there are very few ones you walk into the theater, and you just get chills after you saw it. You were just, you get so absorbed. The Thing was one of them, Blade Runner was one of them, they're just ones that just stick in your mind and we watch it yearly.

And you can watch it again and again. That's, to me, there are some films that you love, but they have to stay in your memory because they don't hold up, and there are others that hold up. This is one of the ones that holds every time you watch it.

Mark: Yeah, it's interesting you put it that way, because it's like, we definitely have seen it a number of times in the theater. When I first saw it, I saw it on VHS. So, the screen was cropped, I missed a ton of detail. So, when I finally got to see it in its proper wide screen format there was so much more to it, and I've discovered over every time I see it, I find something new in the movie, which is a thing, and you find out there are really no holes in this particular movie. You can't look and say go, "yeah, okay, I wish they had done something different."

Erin: And then when you find out your husband hadn't seen it on the big screen, you do have to consider divorce. Yeah, because you know, there are certain things you must see on the big screen.

Philip: Okay, next up. Here's one of the artists, Kevin Smith.

Kevin: My name is Kevin Smith, I'm an artist, illustrator, toy designer, and I'm here at the Sugarmynt Gallery for The Thing. Man is the warmest place to hide gallery. This is my piece, I just called it The Thing. It's kind of my version of the poster of the film. The Thing is one of my favorite films of all time, I saw it at a very early age and it kind of changed my life as far as monster movies go. So, I just kind of put my favorite parts of the movie in there, which is all the monster stuff. So, I cut right to the chase.

The first time I saw this film, I've never seen something change so dramatically before, and it really showed me what special effects could do. I just loved the aesthetic of people changing into blobs of flesh and teeth, and all sorts of nasty stuff, and crab legs coming out of people's heads, and it really just put the spark in my head of like, "wow, I can really... people really push the aesthetic of where monsters go, and I really want to try that." I kind of held onto that aesthetic in a lot of my artwork.

The film came out 10 years before I was born, so I didn't see it till I was around 15 or 16, and that was kind of prime age of when I was exploring. It just hit me like an asteroid. I'm like, "oh my God, where has this been, all my life? This is the stuff I really want to explore. Anything could be a monster!" And that's what's so great about it.

So, John Carpenter, I think I really like the simplicity of his style and his filmmaking. He's never been one to try to wow the audience all the time. He saves it, and he's very good at suspense that way. That shows a lot of restraint, and that shows he knows what he's doing, and I respect that a lot. And he doesn't think his audience is stupid, you know? He knows how to create a good scare, and he likes to feed you and let you enjoy a nice quiet moment, and then pow will hit you with something good, and he'll repeat the process and he gives you a nice ride the whole way through.

As far as the legacy he has on things today, he brought us back the slasher film genre, you know? He showed us how to, how to bring it back and do it right. As a filmmaker, now, if you're trying to make something scary, look to him, look at the basics he sets up, and that's where you play. Then you push the envelopes from there.

Philip: Okay. That's it for today. And we'll catch you back here tomorrow.