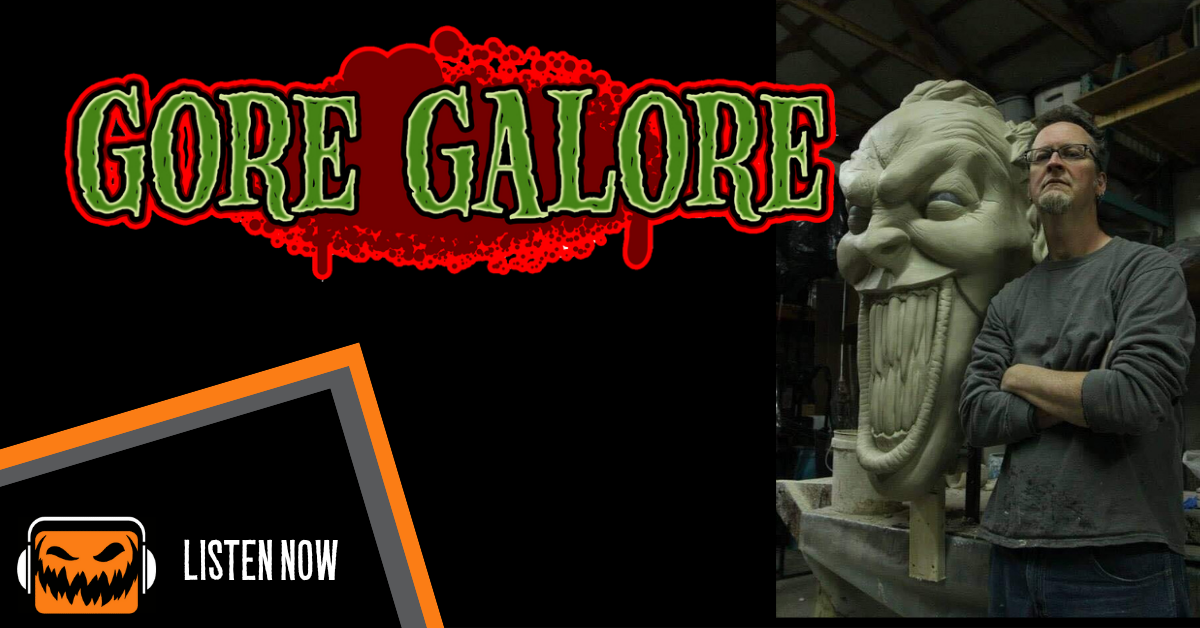 Today we’re previewing the new products from Gore Galore and learning a tip for engaging your actors.

Today we’re previewing the new products from Gore Galore and learning a tip for engaging your actors (https://gore-galore.com/). Now in their 24th season, Gore Galore is known in the industry for pioneering ‘actormatronics.’ Here’s owner and Creative Director Kevin Alvey to explain what exactly that is. This is our vendor showcase series in partnership with the Haunted Attraction Association leading up to this year’s Transworld. Visit Gore Galore in booth 1103.

Philip: Coming up, we're previewing the new products from Gore Galore and learning a tip for engaging your actors. Now, in their 24th year Gore Galore is known in the industry for pioneering actormatronics. Here's owner and creative director Kevin Alby, to explain what exactly that is.

By the way, if you're going to Transworld, you can visit Gore Galore in booth 1103.

Kevin: What we're known for is building giant costumes and giant puppets, or what we term as actormatronics. So, it has a pneumatic equipment installed, cylinders to operate jaw, but the actor is the one that drives it, and the one that gives it it's life. So, hopefully, it means operators are having more fun with the product and that the guests are having more fun because they really think this thing's trying to bite my leg.

Philip: Do you have any new products planned for this year?

Kevin: You know, We've got a new giant actormatronic. We did a giant Mangler Fisher, a giant angler fish. So, it's got, you know, a giant LED globe out front and glowing eyes, and it's UV reactive on top of also being able to be viewed under regular light. So, you can have regular light and then accent with UV. Something new that we've done, that I haven't really seen too many other people do, is kind of using two levels of light to view a product.

We did another small actormatronic, and we did a moray eel. Then we also did the Kill Saw, which is a six foot long chain saw suspended from chain, just like all our other actormatronics, and with a giant blade that spins, or I guess it's a giant chain that spins. We did some new headlamps. We did some new hangers, which are basically severed heads or a giant ice cream cone, or any of those kinds of elements suspended from heavy duty cables so that, you know, customers can push through them through a hallway, that kind of thing.

We did a new, basically, a sled system, which is the Rot Zombie. We basically are doing animations now over the last two years, and we do the three different sized sleds. We call it baby sled, which is smaller for our small actormatronics, they can also be used on the sled.

Then, we've also taken some of our grabbers and our giant costumes and turn them into what we call ankle grabbers. it's a 48-inch-long sled, so those characters can basically come out and that grab at people's legs as they're walking through a haunted house.

Then we were also able to take our giant actormatronics and put them on a six-foot-long sled system. So, we basically set it up that they can take any of our actormatronics that they already have from us, buy a sled, and then turn it into an animation. That's a fairly decent wrap-up of kind of what we did this year.

Philip: How do you go about choosing what genre that you're going to develop each year and the kind of like why the angler fish?

Kevin: I think angler fish are just one of the weirdest animals on the planet, one of the weirdest creatures on the planet, just bizarre. But then you also have that other level, I've got customers that push the trends too. It's called gore-volution, ever heard me use that term before? It just changes based on what's presented before you, we adapt.

Philip: Speaking about adapting to situations into the trends. I want to talk a little bit about trends with you, especially because you've been in business for so long and you have such a differentiated product here. What kind of trends are you seeing, and what kind of adaptations do you think the haunts will need to do for this season?

Kevin: I'm having a lot of customers request, "how can I do this as an animation and not an actormatronic? Because I don't have enough staff, or they don't want to work it." So, one of the adaptations is, I suggested that they put backup cameras. You know, using cameras on the actormatronics so that the operator gets a more visual aspect of the scare so they can really see the scare happening with the big product. Then they would be more motivated, do a better job, and really want to come back and operate it, because they're scaring the crap out of people, because they're able to really nail that scare down, they really nailed the timing.

I've actually worked people away from turning them into animations, because I don't like animations as much as I like actormatronics. I don't think they're as powerful. I think animations are kind of lame. That's no diss against anybody's animations, but animations simply don't scare people very well. They have to be set up perfect, and that's not very easy to do.

Philip: And that active camera, it sounds like that's exactly it. Just making the actors feel and understand the impact they're having. I assume that also, not just does it make them want to use the actormatronic more, but I assume it helps with retention as well, because you're giving them purpose. You're making them see the impact of what they're doing.

Kevin: I think it makes a huge difference, and it really is a nominal investment because, just to get one and try it, it's worth it. I think that it's a simple thing that really could make all the difference for some people. One of the reasons a lot of haunts are having actor issues is because the actors want to be right out in the customer's face, they want to get that scare. Well, an actor by himself, or herself, can't even come close to having the kind of impact that one of those giant actormatronics can because an actor is real life, and these big giant monsters are magic, you know, they're magical.

Philip: What about supply chain issues? Do you have any insight on how that's impacting any of the areas that you see?

Kevin: We do a lot of our own laser cut metal. We have products or pieces CAD drawn and then laser cut and then shipped to us. The metal, just the metal to the laser cutting, has quadrupled in cost. What normally was a $5 piece to have made is now $20. The problem with a lot of that stuff is, when those prices reach a certain point, they don't come back down. Normally it would have been $20 for one stick of this very specific round material that we use. It went from $20 a stick to about $250, and then it finally came back down to $60. Well, it's still three times what it was.

All those pieces became more expensive, but my labor was cut in half because I could only bring back one at a time, and then we worked from there up to two and then up to three. So, each person was picked based on how important they were to the production. We are half the crew, but we do the same amount of work that we did when we were a crew of 10. We get the same amount of work done, and that blows me away. So, it's offset some of those expenses. So, unlike a lot of companies, I haven't had to raise my prices yet to accommodate for all those increases in price, because I cut my labor so much.

You know, COVID was horrible for so many people, but for us, oddly enough, it was kind of a blessing because of the ability to adapt and improve where I could make things better than where it had been in the past.

Philip: Considering how much you have learned and how things have changed recently, next year is your 25th year, do you have anything special plan for your 25th anniversary?

Kevin: Oh, that's a good question. I mean, that will happen along the way. But, no, I hadn't even thought about it, and don't bring it up because it just makes me feel that much more old.