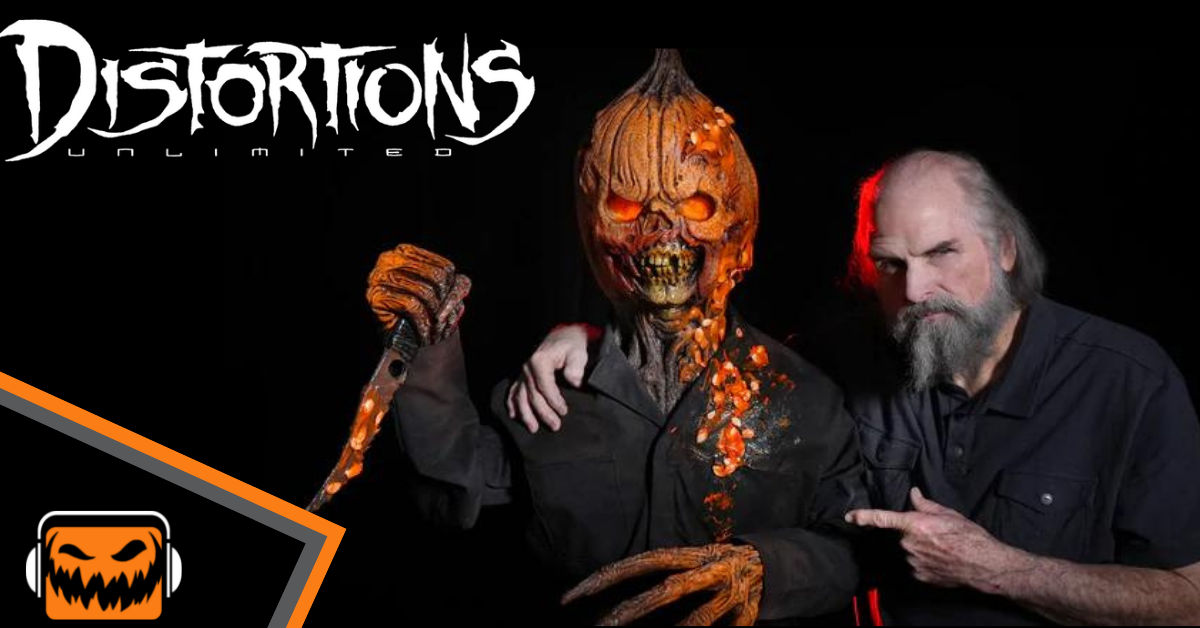 A review of the 2022 Distortions Products. Making Monsters since 1978 is a Distortions Unlimited, a Halloween manufacturing company and online Halloween store based in Greenly, Colorado.

Making Monsters since 1978 is a Distortions Unlimited, a Halloween manufacturing company and online Halloween store based in Greenly, Colorado. Distortions is prolific in the industry, having, as you’ll hear, their hands in nearly every piece of it.

This is part of our vendor showcase series, in partnership with the Haunted Attraction Association; this interview was recorded by Darryl Plunkie and features Ed Edmunds.

Philip: Coming up, the new products from Distortions, and a note about their order cutoff times.

Making monsters since 1978, Distortions unlimited is a Halloween manufacturing company, an online Halloween store, based in Greenlee Colorado. Distortions is prolific in the industry having, as you'll hear, their hands in nearly every piece of it. Darryl wheedled some time out of Ed during this year's Transworld, primarily to discuss the new Mutant and Jack lines, plus a little bit about their ordering timelines. Here's Ed.

Ed: We're in retail, we're in wholesale, we're online. With the exception of the candy, we try to be everything, everything Halloween.

Ed: Well, I have my fingers in candy, I'm just not making money off it.

Darryl: I see. So, how is Distortions Unlimited different from other vendors?

Ed: Everybody's got their thing, we kind of have our own look and things. I wouldn't say we're dramatically different. We try to make our stuff really bulletproof, last, and be clever, but you know, everybody's doing that. So, we're just one of the gears in the system, just making her stuff.

Darryl: What are some of the most popular products that you have?

Ed: Well, right now, we just came out with the Mutant, and that's gone over well. It's one of those problems, you know, you come with these ideas, and you make them, and sometimes they're great and sometimes didn't quite match the vision. That one matched, and people are liking that.

Darryl: Good, that's good to hear. What other new products do you have out this season?

Ed: Well, we have the Creep Show Clowns, it's kind of a replacement of a shock-tronic where you have an actor. We thought, "well, wouldn't it be great if you could have the prop itself scare people?" So, it's got a scissors movement, it's a long story how we got to this point with a dependable scissors thing. The design of it is to trick people into not thinking they're not going to get terrified by a prop, that it's a pure prop.

Darryl: Now what's one of your favorite products that you need people to know about that maybe they don't know about at this time?

Ed: Yes, it was shocking. Where's the... you need to add the rim shot.

But anyway, we brought back the Clawson, which is basically the giant in a different form, t-rex, and we've got this cool head here. It's the wizard, but we made it for Dick Van Dyke this year, and so it's got his voice on it. He did the vocals, and I wouldn't have a little sign that said that, because you know, people wouldn't necessarily recognize that. But Dick Van Dye I always wanted to do a horror movie, he never got a chance, and so he does his Halloween things every year.

Darryl: Yeah. Yeah, it's funny that's, he's really into that. That's very good. Now I see you have a whole bunch of stuff here, your new spiders, and they're all kind of pumpkin themed?

Ed: Yeah. Pumpkin spiders. You know, Tom Cassidy came up with that idea and it's like, "wow, that's weird, and a good idea." He drew it, so we made it. Even though it's just a prop, there's a lot of work that went into making those legs work. I don't want to go into it, but we had a special metalworks company that cuts those with lasers and welds them, so they look good and support the weight.

Darryl: In order for somebody to get your stuff into their haunt for the haunt season, what's kind of the deadline for cutoff for ordering?

Ed: Well, the sooner the better, you know? We did something first time last year we've never done, and that was, we cut off orders. I think it was September 7th. We just, we were looking at the glut of orders and we realized, we're not going to make it. So, we had to that. So, we're like, "oh, we don't want to do that." But we had to. Yeah, we just say, get your orders in. We've certainly got production time right now.

Darryl: So, what kind of a team do you have making all of your stuff?

Ed: We've got a small team, about 10 people, but they're really well-trained. So, they're able to dial it up and get the stuff out, and that works well for us.

Darryl: Okay. Well, I need you to dig back now in your memory banks, what is your first Halloween costume that you remember?

Ed: I do remember.

Darryl: What was it?

Ed: Casper the Friendly Ghost. It was one of those old weird material with the vacuform mask, and I remember putting that on and walking through the corn fields to go trick or treating. That was, I was probably five, I'm guessing. That's way back.

Darryl: That's a couple years ago.

Ed: That's back when we were chiseling on stone.