Thrillvania started with a single temporary attraction, Verdun Manor, 37 years ago. Michael Malec is the General Manager at Thrillvania, but he started working in Verdun as a kid. Today, we’ll speak to Michael about Thrillvania’s 2022 season and how...

Thrillvania started with a single temporary attraction, Verdun Manor, 37 years ago. Michael Malec is the General Manager at Thrillvania, but he started working in Verdun as a kid. Today, we’ll speak to Michael about Thrillvania’s 2022 season and how they’ve stayed around this long. Follow along to our Hauntathon: https://linktr.ee/hauntedattractionnetwork

Michael Malec: My name is Michael Malec and I'm the general manager of Thrillvania. Thrillvania is an amazing, haunted attraction, the old saying goes, who used to coin the phrase, that we were Disney on a dime. Our special effects are unprecedented. When you come through our attraction, and you'll see, it's so real you can't differentiate between what's not, and that's what gives the edge to be a part of an amazing attraction. You might walk by something that's a static prop and all of a sudden, it's static props on your face and everybody says, "Oh my gosh!"

Philip Hernandez: And you have a midway with three separate experiences.

Michael Malec: We do. So, we have Haunted Verdun Manor, which is, oh my gosh, it's so amazing. I love it, this is my favorite.

Philip Hernandez: You're not supposed to have a favorite!

Michael Malec: I do. So, I love them all, but Verdun is close to my heart. I worked here when I was a kid. I was a kid in high school. We also have two other attractions. Cassandra's Labyrinth of Terror, it's a 3D house. We went through and painted every nook and cranny, ceiling to floor, the whole thing is all 3D, and it's amazing. It's a clown room attraction. If you're afraid of clowns, that place will terrify you to no end, without a doubt. We also use loud horns and different speakers. In my opinion, 50% of your attraction is sound, and you have to have the best sound systems you can think of because it just makes you feel better. You feel the music, you feel the sound, and that's a whole character itself.

Michael Malec: Then we have Sam Hain’s Walking Trail, which we did at first have a hayride, and the years we ran the hay ride we had tractors, they run, we have different soundtracks, and people loved it. It just didn't have that feel, you didn't have that feel of walking in the woods and getting scared. It was almost campy, like a boat ride or something, "hey, look, there's a hippopotamus and people go up the tree," and stuff like that. It's not scary. So, we decided to eliminate the tractors and make it a walking trail. That was, by far, the best thing we've ever done. The actors alone, just completely own attraction. I mean, we have some great sets, but I guess the main part that I think of is, it's not just having glitz and glamour and having a beautiful set, it's having the right complement of people with the skill sets to be able to take control of those things. I think it's super important.

Philip Hernandez: Let's talk a little bit about what you have planned for 2022.

Michael Malec: Massive improvements on the infrastructure. A lot of times in Texas, the influence weather starts to hit us. It's obviously hurricane season, and sometimes we get some low-pressure disturbances coming up, and then we get rained on, and nobody wants to walk in rain. We definitely put asphalt and recycled concrete throughout the whole complex, you're not getting mud. Then again, we're an outdoor attraction and a lot of it is outdoor walking from haunt to haunt or attraction to attraction, it takes about 30 minutes just to walk to them all. We're improving the infrastructure on how you walk, make sure things are put in place to where you have a less invasive environment when you travel to each attraction. That's really the improvements, more than anything else, to help the throughput in the flow and to help the infrastructure so we can have better things.

Michael Malec: Now, I'm not going to tell you about the new scenes and sets, because that's like giving you an advantage, and I'm not going to do that. You have to just come out and see it.

Philip Hernandez: Let's talk a little bit about finding the right people. Tell me how you are dealing with staffing this year to maintain that consistent team.

Michael Malec: I think the most important thing is, you add value to your crew. I think if they don't understand, it's just a job, if it's just a job they don't care. I look at it as, like a Broadway musical, we audition people for jobs, and it's very it becomes very competitive. People who've worked with me for 20-30 years, and I have some of them, their job is up for grabs. If there are people that can execute and do better at it, we'll audition them, they'll get voted, and they get scored. It's a very simple method, but everybody goes through it.

Michael Malec: So, if you become part of our cast then you'll be granted to come back, and then you'll have a higher-paid position. The ones who don't, they'll get an e-mail saying, "thank you for coming out and auditioning for us. This is what you scored and better luck next year. We look forward to seeing you, but unfortunately you're not going to be part of our team this year." I know it sounds pretty harsh. We all have a bunch of friends, and we all work together, but then again, you have to stay relevant, you have to stay in with the times, and you have to make sure you offer this same consistent product all the time. So, whatever I could do or learn to get better, that's what I do. I take a lot of risk, and a lot of smart risks is part of it, because in our market, sometimes it works great in our market, but it doesn't work in other people's markets. We plan ahead, we look at the future, we go, "OK, this is what we're going to do. We're going to try this. It might be horrible, but guess what? It might work."

Michael Malec: One other thing that I use is it's going to be a simple phrase, I'll tell you this, if you don't track it, you don't master it. You track everything. I track temperature, I track if it's raining, and I know how much toilet paper people are using. You have to track it all, and it sounds horrible, but then you understand you have a benchmark. "OK, we're going to do this year this way. Maybe we should cut this day out because yeah, we broke even." Nobody is in business to break even. Honestly, we want to make money and that's how we survive. It's difficult these days now to keep in this market share.

Philip Hernandez: Specifically on the staffing, you have them audition every year. Also, you're tracking a lot of your metrics. Is there anything else that you specifically do that you think has helped retain your team for this year?

Michael Malec: You don't add benefits. You don't pay extra money. Some places do. Some people, "hey, I'll give you a $20 bump or a $10 bump if you do this." It's not about that here, it's not about the money, and it's not about what you make. It's about how you feel and what you do, people enjoy scaring people, that's it. It's basic, guys.

Philip Hernandez: So, the last thing is technology. Being in business for as long as you all have, talk to me about how you are doing that. Are you incorporating any technology, or what are you changing to stay relevant?

Michael Malec: I think the most important thing is you put it out to your customers. Customers are going to tell you what they want, they're going to tell you everything, and follow up with complaints, or even the good news. The big things, follow up, follow up with people, get that information, and use that. Figure out, "hey, I have 10 people who says this is a problem. I'm thinking, you know what, you have a problem, and let's see if we can come together and fix it." We did that with online ticketing, which is a godsend. We control when we sell tickets, and how many we can sell pro block. The biggest benefit is you don't have a crowd at 9:00 o'clock that shows up at your haunt and you're open to 3:00 o'clock in the morning because you're putting the crowd out. You're actually breaking it up into spaces, and I think that's... It's something we've done for several years here, but you have to look for that. I don't know, to me, I feel that you have to see those things ahead and we're going to bring your business. It's hard to see that.

Michael Malec: I'm a big person about repurposing things. You can go out to Transworld or any of these haunted shows, and you can see all these new gadgets. Gilderfluke, everybody knows them, and I like Gilderfluke, we have several animatronics that work off Gilderfluke. Sometimes they're very complicated to work with and they're very costly. We've developed an R&D part of our infrastructure, and we look at things that we want to do. Then we go through there and see how much it costs, do the effect help the cost, are people going to be excited about it, is it value added or is it non-value added? That's like a business, and we look at every aspect of it. It then goes to proof of concept. We go through it, we lock it down in engineering, then they start to build it and then implement it. It's pretty simple. It's just like any other engineering business out there. 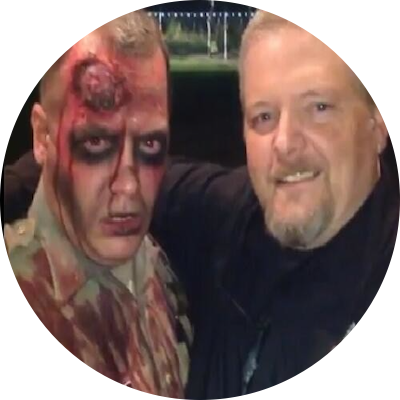