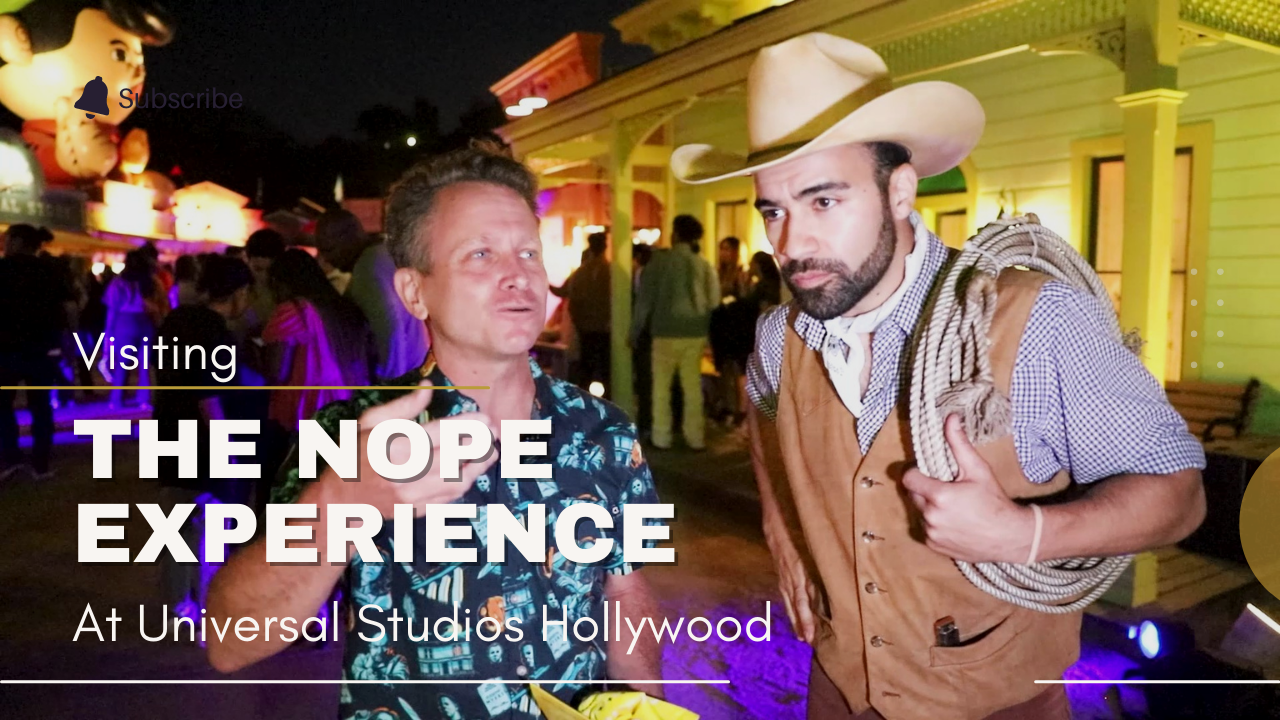 Today, we’re joined by Horrorbuzz founder Norm Gibney to discuss NOPE and the in-person immersive event that universal put on to launch the film.

USH has added a section to the studio tour for the first time in a long time. Jupiter’s Claim is the actual set from Jordan Peele’s new movie NOPE, and it was added to the studio tour to correspond with the movie’s debut. Today, we’re joined by Horrorbuzz founder Norm Gibney to discuss the film and the in-person immersive event that universal put on to launch the film.

Philip: Let's start off with, if you can give us a little bit of background, what is “Nope”?

Norm: Okay. Well, “Nope” is the third film from writer, director, Jordan Peel. His first big movie was Get Out, for which he was nominated Best Director, and he actually won Best Original Screenplay. he really shook things up and made a name for himself

Philip: Let's talk a little bit about what you thought of the movie without giving spoilers.

Norm: Yeah, Yeah, of course. “Nope” is definitely a Jordan Peel film, it is socially conscious, it is steeped in film knowledge, it is beautifully constructed as far as a plot. The characters show moments of true sincerity, honesty, and frankness. He has a knack for creating characters that are very down to earth. So, with that we have the setup where a low-key brother and an outspoken, high energy, younger sister, are left with their family's ranch in California that supplies horses to the film industry. Okay, and their next-door neighbor is a child star who has built a local theme park from his childhood TV star success. You have rural neighbors, and then both of them start to see weird things at night up in the skies, and there you go, that's the start of it.

Philip: You mentioned down to earth characters. Tell me why is that important in horror specifically?

Norm: Oh my God, you need to be able to relate to people in horror films. You must connect with them in order to identify with what they're going through. You need to be able to connect somehow, but it is so often forgotten in the horror genre. characters are, tare funny, they crack the jokes you would crack at a movie, and they are just thoroughly relatable. You just, you immediately connect with them.

I think that in this particular type of horror it is essential, because what Jordan Peel's technique is, he makes you connect with the characters. There are other types of horror that are obtuse, like David Lynch type stuff, that want to make you uncomfortable. But Jordan Peel's technique is to disarm you and really make you feel connected and think, "oh my God, what would I do in this situation?"

Philip: That kind of segues into the other thing I wanted to ask about, which was the socially conscious portion of that.

Norm: Well, honestly, horror has always been socially conscious. It has always been the genre of the underdog. There's always been the genre of the ousted monster, the final girl, the home to the homeless, it's always been the place where the misunderstood could find a platform to find understanding. So, to be a socially conscious horror film is not necessarily groundbreaking, but the way that Jordan Peel approaches it is very forward. Honestly, it's refreshing. In this particular film, “Nope”, the movie explores representation, themes of representation, of the exploitation of animals, of the use of animals in film, simply just the experience of being in the film industry.

Philip: Well, of course, the reason that we're talking about this is because there was an experience that we both went to for the opening of “Nope”. A larger context here, of course, the popular horror culture that is in movies does kind of directly impact the kind of Halloween ecosystem, as I like to call it. And it directly impacts what haunted houses do, not just because they're part of the ecosystem, but also because the guests are bringing in these experiences when they come to haunts. So, you get it kind of from both directions. This one is especially interesting because Universal Pictures, of course, has a set and they put the set at Universal Studios Hollywood, and made it part of an attraction, and then they also partnered with JFI Productions to create a physical experience.

Norm: Here we had kind of the blending of so many different mediums. We had the theme park medium, we had immersive, we had film, and what we got to experience was kind of a blending of all of those. Now, obviously, there's the movie that we just spoke about, but then there is the set that you and I got to walk around through, and that was the actual production set. After they finished shooting it in Agua Dulce, California, they transported it to a spot along the tram route where the tram could physically drive through it.

They took that set, they plopped it down into a section of the studio tour, they have all kinds of sound effects and things going on. So, that's cool that, you know, theme park guests are going to be able to see the actual set, the actual sounds and even the props, right down to the props. But what we got to experience was something pretty darn special.

Philip: Let's talk a little bit about that experience.

Norm: The night that we were there was all about social media, and all about Instagramable posts, reels, and things like that. It was constructed to deliver a complete social media blitz, and it did that. Initially, we were dropped off in the Wisteria Lane section for just a bite and some drinks or whatever, but then there was a smaller tram that took us up further, closer to Falls Lake, where that big backdrop is and where Fast and Furious is, and then we were dropped off there to the set of Jupiter Claim. Jupiter's Claim is the set of the tiny little theme park that the child star built.

So, we get there, and JFI Productions, who is known for Creep and The Willows, they populated this immersive set and sound effects that were provided by the theme park, and by this movie studio. They put actors in it that were walking around, acting as if they were working at a tiny theme park, and getting us to play little games, getting us to take pictures down a well, and giving us, you know, coins. I mean, they were giving us these tasks to go around and enjoy, get prizes and pictures, and all this stuff with. Every so often there would be the show moment where we would hear this bizarre creaking knocking noise and the power would go out, and the actors would all start screaming, and they were basically acting like they were seeing something in the sky. After seeing the film, I know exactly what they were looking at. So, it was kind of cool.

Philip: Well, that kind of brings me to the last section here for this discussion, which is really about trends. From your perspective, I'm wondering what you think about what this all says about trends.

Norm: With regards to haunt experience, I think that immersive experiences are pretty established.

Philip: I would say that, yeah. They've been around for quite a while now.

Norm: Yeah, working them into a theme park environment is difficult, because with theme parks, there's

Yeah. It's the throughput, they have to have that. So, as far as film experiences, I mean, these are wonderful activations. As long as social media still has a power, then we're going to see these activations. And this was only one night. This was only one night, and they, you know, employed theatrical producers, immersive talent, and immersive producers to hopefully make some sort of a mark on social media. Now, as far as the theme park goes, this is the first time that a movie has opened the same day as a studio tour attraction.

Norm: So, that's what makes this particular addition unique. There's such an interesting change going on along the studio tour, because it's an iconic attraction, there's nothing else like it in the entire world, but at the same time, you know, the gimmicks they were using in order to make it interesting year-round are aging. King Kong, I mean, what are you going to do? I mean, that was really cool the first couple of years that was opened. Still, to this day, my favorite thing is Earthquake, which opened like mid '86 I think, but that's still a practical set and it's all these live effects and everything like that. Jaws is still there, that's a practical thing. And then Fast and Furious, they attempted to use a mix of practical and screen elements. But it's really interesting to see how these different gimmicks evolve. 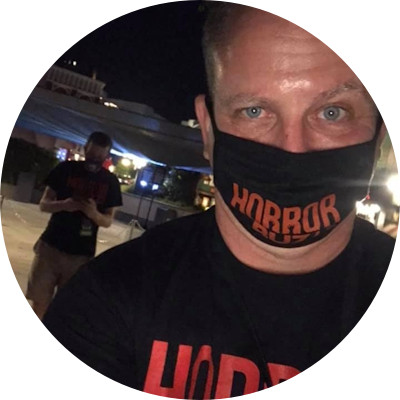 Norman J. Gidney is a Los Angeles-based film critic and writer. Founder of HorrorBuzz and writer for Film Threat, Norman grew up in Southern California learning to read by scouring the Calendar section of the Los Angeles Times and is an avid film fan with a special love for horror and genre films. His goal is to champion horror, queer cinema, and the independent filmmakers who sacrifice everything to tell their stories.