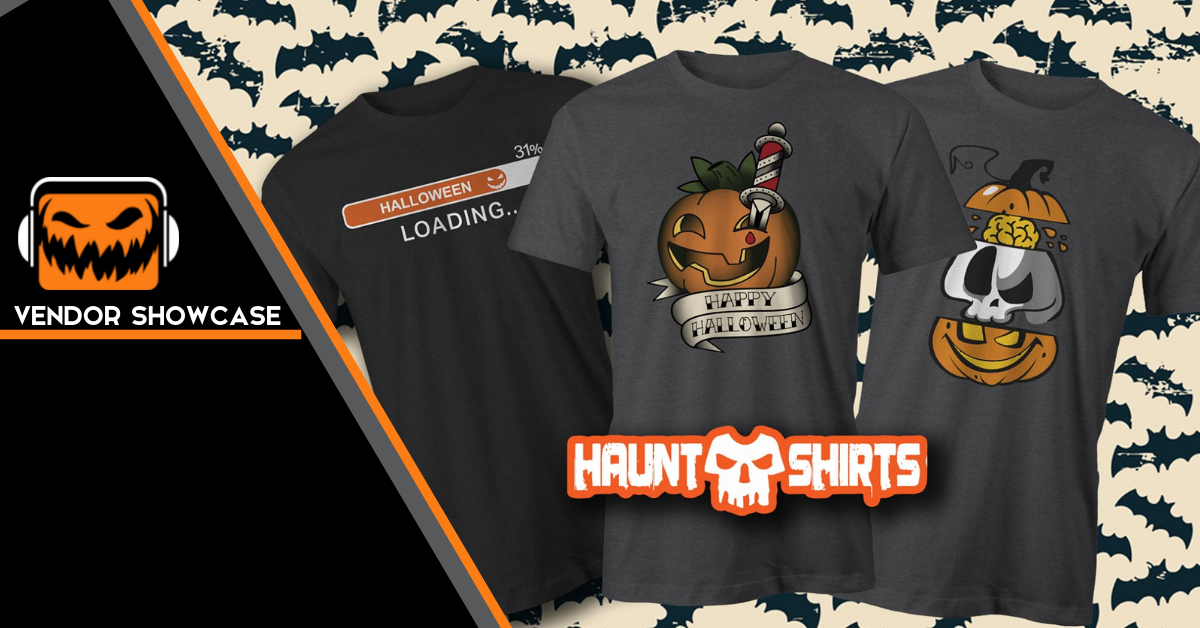 Haunts Shirts is Halloween apparel for everyday Halloween people with new apparel types, new designs, and will be at Transworld 2022.

Over the last five years, Haunt Shirts has grown from a haunter driven shirt company to a Halloween apparel company, one that might just be releasing beachwear next month at Transworld. It's been almost four years since James and Melissa have been interviewed by The Haunted Attraction Network, and a lot has changed.

Melissa: One of the brands that we have under Haunt Shirts, it's 1031 Halloween Streetwear, we focus on street wear. So, we are very inspired by the hip hop community, the surfing and skater community, everything that is street. We bring that element into our designs so that it is not so very cliche, whimsical, or gory, or anything like that, so that people of everyday life can wear it.

Melissa: When we first started Haunt Shirts, it was haunter driven. Our shirts had the word haunter in it, it was more haunter than it was Halloween. What we discovered is that there is a small market of haunter, while there is a much larger market for Halloween, and that larger market for Halloween are also the haunters. We started to pull out of just being haunter and doing more Halloween and trying to have a balance between the two. So, it's not just in the haunt industry, it can be applied to mainstream.

James: That allows us to serve both audiences.

Philip: Yeah. The direction has definitely shifted, as you said, to focus on the street wear and to be designing products that can be worn year round with that streetwear focus, that is not just like a sea of black shirts, is that kind of correct?

James: What I would say is, we're becoming more of an apparel company than we weren't t-shirt company in the past. So, we've evolved over the years and now whenever somebody asks now, I just tell everybody, "we're an apparel company." We've got no onesies, and t-shirts, and hats, and who knows what happens in the future.

What Does The Future Hold For Haunt Shirts?

Melissa: Well, we don't want to give away too much. We have new designs, we have new types of apparel that we are going to be debuting these designs on. I'll just give you this hint, okay? You'll be able to wear our stuff to the beach. Not everybody lives in cold parts of America, and there's a lot of people that live in warm areas that might want to hang out at the beach or poolside or something.

James: And to branch out of that, one key learning we've had over the last few years is not everybody wants to wear a black shirt.

Melissa: That was one of the really cool things to hear was like, "man, we just love your company because You have some red shirts and you have yellow shirts, and you have purple and blue, and it doesn't have to be just black."

Philip: Would you say that that is one of your biggest takeaways over the past several years?

James: I would love to say we thought of that, but that came from the conversations with the customers that, "this is what we want." And we sat back and said, "well, let's give them what they want. I mean, they're asking for it." I don't want to force feed anybody and say, " this is what Haunt Shirts is," because it's an evolution and it'll continue to evolve as we continue to grow.

What Does Haunt Shirts Have Planned For Transworld? Spoiler: Get There EARLY

James: We will be in booth 1102. So, literally when you walk in the door you will see us. We are two booths over from the front door.

Melissa: I really want to make it look more like a street wear retail store. So that people, especially since we're at the front and we're one of the first things you're going to see, we really want people to be like, "Ooh, I feel like I'm going to my favorite department store."

James: And we say this to people every year.

James: Get there early, because you know, those folks that like the little bit larger sizes, those tend to go pretty quick. If you wait until Saturday, you're probably going to be out of luck in many cases.

Melissa: That's true. We did find a supplier; we are bringing more larger sizes in the 4X and the 5X. So, we will definitely have some of those on hand.

James: On the onesies.

Melissa: And the t-shirts. So, we will have those on hand. But yeah, like James said, I can't tell you how many times people come up to the booth on Thursday or Friday and they're kind of looking around, they're like "yeah, I'll be back." And then they come back Saturday afternoon, Sunday morning, and they're like, "whoa, what's going on?" And I'm like, "sorry, we sold out. Like we sold out the day you left." People tell us that we should bring more inventory, and I'm telling you right now, there is no possible way anybody can bring as much inventory that we're bringing to this show. So, you just need to come early, like heed our warning.

Why Is Halloween Important?

Melissa: Oh, goodness. Well, Halloween has been pretty crucial in my life, almost all my life. There's something about Halloween that was always my safe space growing up. I was the weird kid that found safety, calm, and beauty in the cemetery while everybody else was scared of it. That would be my place to go to kind of hide away from what I thought was dangerous. So, kind of a juxtaposition there of, going to a place that is normally viewed as being scary and dangerous is where I found my safety.

Halloween was part of my life growing up, my mom used to make costumes, my stepfather and our neighbors used to build a little Tiki hut, and we would scare kids.So, growing up, my parents were essentially haunters, and I found that Halloween was the place where I felt most me. I wore a mask all year long, and then Halloween is where I got to show off my true colors. So, that's just how I've always felt about Halloween.

James: I think it's important that it's the one time of year everybody can be themselves, and nobody judges them for it.

Melissa: In my opinion it truly is the happiest time, or the most wonderful time, of the year, because I can't tell you how many times, how many people complain about Christmas and the stress of it, and the anger, and the panic buying. You don't hear about that at Halloween, everybody is like having a grand old time, they're drinking, they're partying, they're wearing costumes. You're getting out of your home, so to speak, you are getting out of your comfort zone, and you're meeting new people.

James: We met all of our neighbors through our home haunt, cause that's where they would show up, and we wouldn't see them again for a year.

Melissa: It's so funny how, what is supposed to be the loving and giving holiday is the one that people are, I think, most stressed and frustrated with. It's quite beautiful, it's a beautiful holiday, but the holiday that everybody is like scared of is the one where everybody comes together the most. it's so funny how they are, and I just think that Halloween is that for so many people like James and me, on that personal level, and on that social kind of aspect of it.