Adam LeBlanc: My name is Adam LeBlanc, owner of Dark Harvest Haunted Attraction in Anaheim. After two years of being at Frosty's Forest in Chino, we decided to come back to our stomping ground. So, near to this year we decided to go with the asylum theme narrative with our antagonist Dr. Botkin, and he only doing experimentations on some of the patients here. So, we have a few show moments to highlight those different things that he's been doing to the patients. So, I partnered up this year with Dave Larson from Pirates Cave Productions, and he has been an extremely huge help getting some of these show moments in real life. So, I'm trying to get to that point where I'm not doing just so much of the boo scares.

Adam LeBlanc: I'm trying to get an audience, organic audience, that would follow me, akin to maybe something like what Jeff from Sinister Point would do, you know, bouncing around. Trying to get a building at least a building that we can be like 17th Door where you really have to keep tearing stuff down. Tearing it up, or bringing it down, there's a lot of work. It's very exhausting for me, my family, and the people that help me. So, if we can find a place like that would be great, and we can maybe do an escape room, or do something for different holidays. So, that would be my ultimate goal.

Dave Larson: My name is Dave Larson. I ran the Pirates Cave Haunt for about 22 years, and this is our first year as a professional haunt, working with Adam and Dark Harvest. I was in charge of basically three show moments; the first is the reception room, second one is what we call the elevator waiting room with the barrels, and the third one is the elevator itself and the mineshaft that follows it.

Philip Hernandez: Which one do you think is the most interesting or challenging?

Dave Larson: Well, the one that was the toughest this year was the elevator waiting room with the barrels. We have, I think, about 8 different DMX lights in there, and also the DMX is controlling the fog machine, the geyser, and then the elevator as well.

Philip Hernandez: First of all, for people listening that are not watching, can you explain what happens in it, and then we'll go through some of the how you built it.

Dave Larson: Yeah, the room is supposed to be a waiting room/storage room in the asylum. So, these clowns like to hang out there and smoke, and there's a lot of chaos going on, of course. So, they see the tourists, or the investors, coming through and they realize that these guys might be our ticket out of here. So, they hassle them, they got a plan they're going to hatch to take the people upstairs with them, but then the security guard arrives and thwarts their efforts. Sob the one guy says, "well, if I'm not going, no one's going." He takes a cigar, dumps it into one of the barrels, and the room explodes.

Philip Hernandez: Tell me, mechanically, what's happening in that to make that happen?

Dave Larson: Oh wow. You know, first of all, it starts with a soundtrack, you know, a scratch voice-over, and then sound effects. You get the timing right, and then you drop out the scratch voice-over, and then you have the actors come in and get their timing right. But then, of course, you, have all the DMX lights sequencing with the different colors, we have two different fog machines that go off at different durations and different colors. Then also, the switch in there that starts that sequence, but then they evacuate that room and there's a second switch at the elevator that starts the second sequence that runs the elevator.

Dave Larson: All that runs from one sequence controller, both scenes. It's a FlexMax, so it runs at DMX, it runs like 18 different outputs, sound, it runs our video screen in the elevator, our fog machines, and strobes. It's a great piece of equipment.

Dave Larson: Right. The elevator was brand new last year, and everybody loved it. So, we were trying to figure out how we could bring it back and integrate it into the story that we had here, we think it fit pretty well.

Philip Hernandez: Yeah. So, what do you think about the future of where this is going? Because I know this year this is a partnership between you and Dark Harvest. Is this something you're going to be doing more, working with other haunts, are you back to the home haunt?

Dave Larson: No, I think we're over the home haunt. You know, we had a neighbor complain. We were doing it for 22 years we had 5,000 people go through last year, and we just got too big for the neighborhood. So, it was understandable we had some complaints. So, we moved out of that, and I always wanted to try a professional haunt. This arrangement came up with Adam, he needed some help, so we came in and helped him out. You know, my specialty is tech, sound effects, editing, and it's not really the building and things like that. So, it was a good mix of different talents to put this together.

Philip Hernandez: Is there anything else that you think it's important that I didn't mention or bring up?

Dave Larson: You know, we changed our name to Pirates Cave Productions because I love the text. So, I've actually developed my own custom peekaboo controller box that has a lot of electronics, that has an external amplifier, and four channels of audio. I'm excited about that, bringing that to haunters next year, and providing just the tech, I find that a lot of haunters struggle with sound effects, lighting, and computer control things. They just run out of time, so I would love to be able to provide those services to other people.

Philip Hernandez: Yeah, tell me where people can get tickets. And tell me when you're open.

Adam LeBlanc: So, we'll be open from now until the end of the month. Next week we are open Friday to Sunday. Tickets are available on darkharvesthaunt.com. 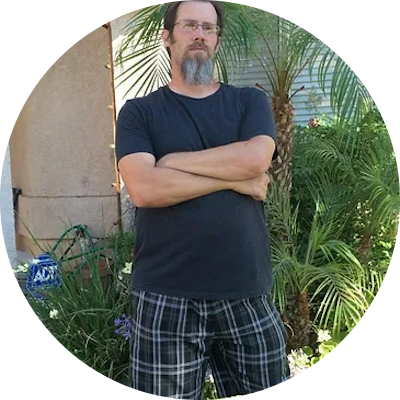 Adam LeBlanc was the Owner-Operators of the Fleshyard Haunted Maze. Adam is a Unix Systems Engineer by day, but devotes tons of man hours to his love of all things haunted.
Since his early teens, he has been obsessed with creating mazes and scaring people. He started putting on small scale garage haunts as a kid with some friends on his street. As an adult, that passion for creativity never left and he has done multiple events at his own house.
In 2015, he wanted to create a full scale independent commercial haunt. 2019 was the fifth and final year doing the Fleshyard as a separate entity. In 2020, he helped create the "Harvest of Horrors" event at Frosty's Forest Pumpkin Patch in Chino. In 2021, The Fleshyard was officially rebranded as "Dark Harvest". The irony of his passion is the fact that he is VERY easy to scare and startle, so everyone loves to take advantage of it!

Dave Larson stuck his foot in the door of the Haunt world in 1999 when he put on a costume, stood in his front yard, and scared the trick-or-treaters. Over the next 22 years his home haunt expanded, from walk-through displays, to a multi-screened display during the COVID lockdowns. His final year of doing the home haunt, in 2021, he had 5,000 people come through the haunt over 9 nights, highlights included a computer-controlled simulated elevator, a dropping bridge, and DMX lighting.

Now Pirates Cave Productions, Dave Larson looks to bring tech, his experience with DMX, sound effects, lighting, and synching it all up to other haunts.