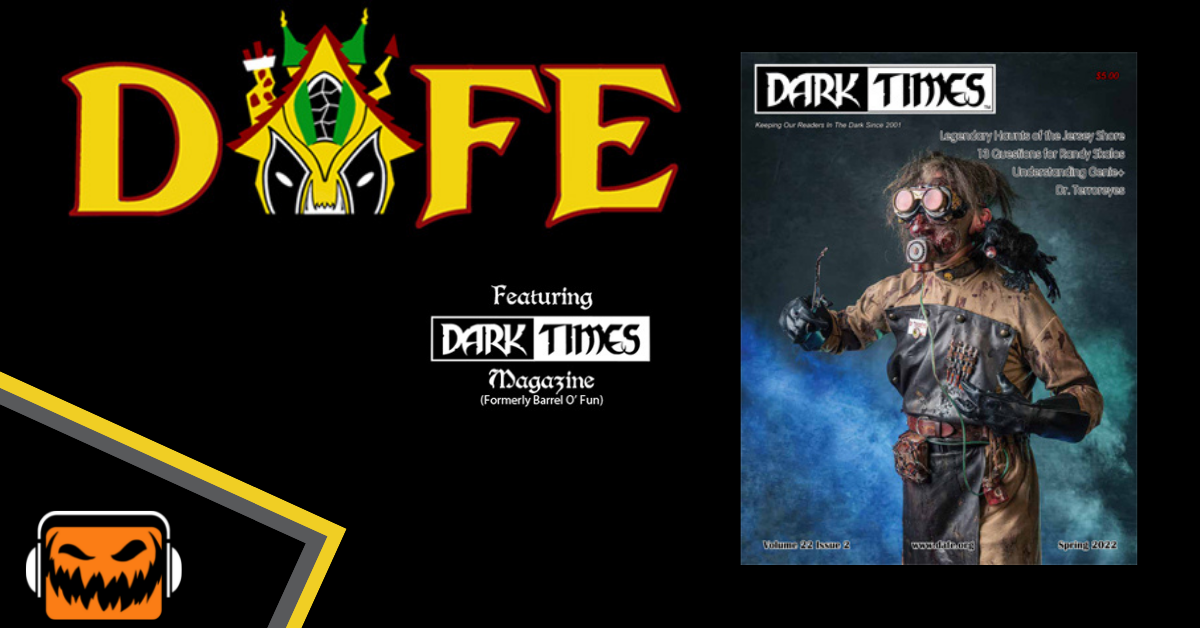 Now in its 22nd year, The Dark Attraction & Funhouse Enthusiasts (DAFE) is a not-for-profit organization dedicated to documenting, preserving, and enjoying dark attractions, haunts, and escape rooms. Today, we’ll hear about what DAFE has planned for 2022.

This is part of our vendor showcase series, in partnership with the Haunted Attraction Association; this interview was recorded by Brian from Haunter’s Toolbox and features Rick Davis.

Philip: Now in their 22nd year, the Dark Attraction and Funhouse Enthusiasts is a not-for-profit organization dedicated to documenting, preserving, and enjoying dark attractions, haunts, and escape rooms.

As we've discussed before organizations are important for connection in the industry. Actually, we have a list of all the organizations you could consider joining in the show notes.

From the haunted attraction network, I'm Philip, and this is our vendor showcase series in partnership with the Haunted Attraction Associate. Over the next few weeks, you'll be hearing from over 30 member companies we caught at this year's Transworld, all recorded by different reporters of the network. Brian from HaunTopic Radio and the Haunters Toolbox conducted this interview, and here he is from the show floor.

Brian: We're at the Transworld Halloween Attraction Show 2022. Man, it's off the chain here. I'm talking to Rick Davis. Many of you guys know him from the Dark Attraction and Funhouse Enthusiasts, or I how do you say that Daffy?

Rick: Yeah, Daffy. When we chose the acronym, we knew people think that people have this interest are a little touched in the head, so why not have fun with it?

Brian: And what year is this for DAFE?

Brian: So, people that don't know what is DAFE?

Rick: We are the Dark Attraction and Funhouse Enthusiasm, we're the crazy people-- professionals, amateurs, haunt owners, home haunters, manufacturers, ride builders. You name it, if it has anything to do with the industry, we probably have a member. For the enthusiast and is, we're out in maybe two events per year. Summertime's usually amusement park related, so we're looking for dark rides and hoping we have an area with a full-time haunt. And come October, of course, we want to do a haunted house, which is a little tougher because I'm building a home haunt, everybody else's building haunts. We try to get out twice a year.

And we also have our Dark Times magazine, which is quarterly, full color, articles are all dependent on what people send us, which is kind of tough. So, anybody out there that has a haunt, you want some promotion, send me some articles with high-res photos. Yeah, we have a good time down here, I think it's more about meeting people.

We've got single memberships, we've got family memberships, we also have a business membership. Business membership, one of the advantages is, we don't do advertising in the magazine itself, but if you're a business member and you send me 200 flyers, I throw one of those in with the issue, which doesn't cost us anything, and it would cost you quite a bit to mail 200 flyers. And even if you don't do that, we have some people that don't belong, but they give us a discount and we have a page devoted to discounts. So, once again, names out there at least four times a year.

Brian: So, we all know there's other organizations out there. What's makes DAFE different?

Rick: Well, we are the only one that's dedicated... originally it was just dark rides and Funhouses, and we've expanded to include any type of dark attraction from mazes, haunts, and now escape rooms.

Brian: So, of all your years in DAFE, what's one of the coolest things you've seen?

Rick: I've got a lot of favorites for different reasons. Of course, Disney, Universal, some of the rides are just cool. I mean, you got Haunted Mansion, which a lot of people's high-tech, but really, it's not, it's a lot of old school. Some of our favorites is Knoebels Amusement Park in Elysburg, Pennsylvania has got probably the best traditional dark ride. It's not really scary, but the secret is they've got a theme, their sound is right, the lighting's right, the timing's right, and more importantly, everything always works. That's the downfall of some of the rides.

Brian: That's just like attractions too. Sometimes you'll see people that put so much money into them, but their timing's off, their lighting's off. I like the old school ones, cause that's what I run. So, it's the simple things that get me.

Rick: Yeah. It's like, I can appreciate the new 3d videos and all that stuff, but that's not my style.

I always say, just because it's not my style, it doesn't mean that's what's good for the park or attraction. No, Kennywood Park had a hundred-year-old mill. They changed it one year to Garfield, and I kept getting, "why did they do that? Why? It's not original." None of these were original back to 1902, and then the same thing, is it what I would have done? No. But is it what the park needed? More kid-friendly? Probably.

Brian: I see here that you're a member of the Haunted Attraction Association. The Association is going to be part of, because there's a lot of mentorship, bouncing ideas off of each other.

Rick: Yeah, and I do have one benefit. I am a CHAOS certified. I also , I went through the three day Pennsylvania Ride Safety Seminars to do an article, and the guy goes, "well you have enough credits to get the certification," and that's helpful as a home haunter. I've got a fire chief that comes and checks on me. So, he's got a copy of the CHAOS, he's got a copy of the Pennsylvania, I used to work for the FAA, so he knows first aid trained, and all these certifications. If somebody questions what I do, he's got a whole pamphlet there, and that's something I've always try to stress to the home haunters, is we're not exempt. The fire departments do take a look at us, you know? As I told my Fire Chief, he doesn't need problems, I don't need problems. It's just, try to stay one step ahead of the game.

Rick: You can go to the website, which is DAFE.org, and you can find us on Facebook as DAFE, and also there is the second page as Dark Attraction and Funhouse Enthusiast.

Brian: Well, Rick, I hope your show is outstanding.