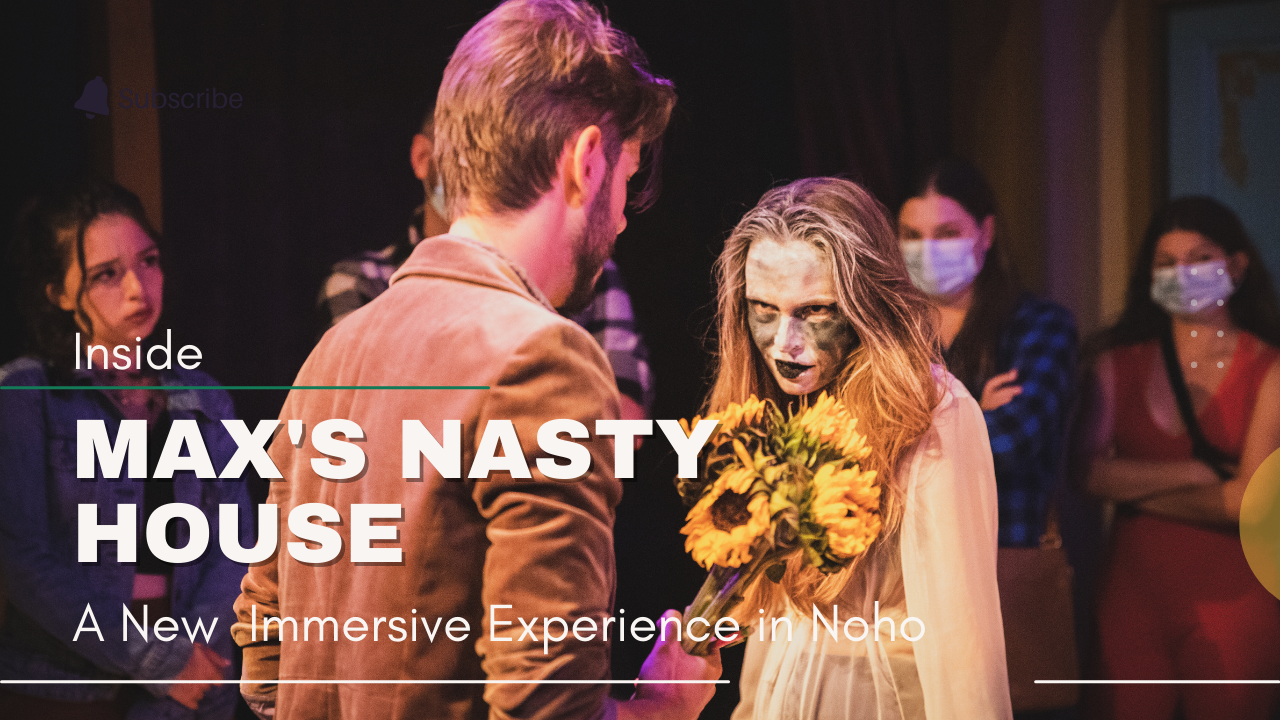 We’re going on-location to Max’s Nasty House, a new immersive production from Ballview Entertainment held at the Brickhouse Theatre in North Hollywood. We’ll learn about the directing of this sandbox environment and the “All Inclusive” ticket options. These elements are something you can try incorporating. Max’s Nasty House shows Thursdays through August 18th, 2022 - Get tickets HERE. This interview features Director Megan Colburn.

Megan: My name is Megan Colburn, I am the Director of Max's Nasty House. I also play Virginia the Greatest Realtor in LA in the show.

So, the show is about the selling of Max's Nasty House. It is an open house where you, as an audience member, will come in and actually be potential buyers of the space. So, you'll get a tour of the different assets that are involved in the house, and you kind of get to join in on the house's nightly shenanigans. David Dickens came up with the concept for Max's Nasty House a few years ago with a couple of our associates, and we decided to finally mount it, and he graciously let me direct it.

This is an original piece, it's what we call sandbox theater. So, you'll come in, you'll get a little bit of a tour of the space, and then we let you go free range through an open house style theater.

We've grounded it in NOHO, this show does take place in North Hollywood. Max's Nasty House is in North Hollywood. If you're familiar with North Hollywood you really get the inside information, there's some jokes in there for you, but it's also just really cool to have something that's a little bit connected to the world outside, and I think that helps with the immersion.

This is completely unscripted, and for me, that's a first.   our cast is used to a scripted environment. So, long form improv is really unique to everyone here, and it's been really cool to learn that different style of directing.

Everyone in the house has their own goals, their own hopes, their own dreams. Everyone in here is just like a real person, but nastier. You get to come in, and if you spend time with certain characters, you might get different pieces of the story. There's an overarching story that we take you through, that you will definitely get from visiting each character, but every character is extremely lived in, very developed, so you know that there is a past behind all of these people. This isn't just a, the theater lights come on and their lives begin. Their life has always been here, they have always been here, and you really see that by getting to spend one on one time with them, and as much as you'd like per character.

The show is 50 minutes long, on Thursdays at 11:00 PM. The tickets are $15 for a regular ticket, or you can do an all-inclusive immersive ticket, it's five extra dollars, and from the entire week leading up to the show you get content specifically for you. You'll get phone calls, emails, photos, video calls, all from the different characters within the house, asking you to help them build on a certain aspect of the show that you get to see when you come in.

The reason we wanted to do the all-inclusive immersive content was because Max's Nasty House is in North Hollywood, and so we wanted to give you the sense that you were really coming in from North Hollywood, you're really looking to buy a location here in the space. That's a really hard thing to do, it's hard to wrap your head around still being in the place where you live. So, if we bring you in before the show you really feel like you're getting to experience a lot more than just, "oh, here's this weird theater space that I'm walking into." It is an actual house that we are really trying to sell, and we pull you in every step of the way.

Philip: Okay. Before we hear about the future of Max's Nasty House, let's talk to some guests and see if some of the elements that Megan mentioned came through.

Guest 3: I thoroughly enjoyed it. It was unnerving about the whole time, but in a fun way. Like, we were laughing, I just didn't know when somebody was about to pop up behind me or invite me to try something that I've never tried before.

Guest 1: Interacting with everyone was really like special to me, I think. You could come multiple times and have like a different experience every time.

Guest 2: This sort of show has a lot of improv in it. So, it's based on how the audience interacts with people, different things will happen, and so it was pretty distinctly different each time I went.

Guest 1: The spit, the splash zone, got to be careful of that one. I like the way they wrapped it up in the end, they kind of made it all worthwhile for everyone

Guest 3: This felt like I was a part of it, I had a really good time, yeah.

Philip: Okay, here's Megan to tell us about the future of Max's Nasty House.

Megan: For right now it's a pretty long run. In total we're doing eight weeks, so we have six weeks left from when this is recording right now. We might have some people come, some squatters in Max's Nasty House, which is pretty fun. So, the cast might rotate a little bit, but the overarching story will be the same every night. But you do get something different every single night you come.

The future of Max's Nasty House is really going to depend on this all immersive, inclusive content. We have ideas we would love for people to come in and say they want to see more, and if that is the case, then I don't want to give away too much of the show. But there is a lot of room for growth, there's a lot of room for expansion, especially because we bring so much of North Hollywood in with us.